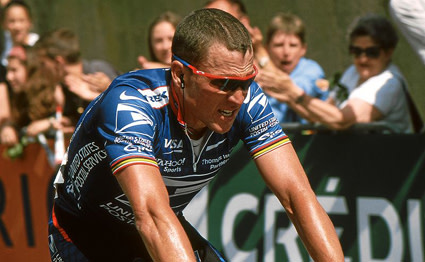 Steroids. Human growth hormone. EPO. The cast of characters implicated in major athletic doping scandals are familiar to fans who follow major sports. Nor are accusations of doping anything new to Lance Armstrong, the seven-time champion of the Tour de France and most famous American participant in a sport constantly marred by scandal. Armstrong has always denied the doping charges, and he continues to in the wake of a major investigation published this week by Sports Illustrated. But this time around, reporters Selena Roberts and David Epstein allege something new: That Armstrong illegally acquired and took an experimental drug called HemAssist, which never got beyond clinical trials. So what is this stuff? HemAssist, developed by Baxter Pharmaceuticals, belongs to a group of drugs called hemoglobin-based oxygen carriers, or HBOC. Simply, they are blood substitutes, ones that mimic the structure of hemoglobin—the protein in red blood cells that transports oxygen. According to a scientific source we spoke to, who researched these drugs for years but preferred to provide background anonymously, the drugs mimic the structure of hemoglobin to more than 99 percent, and can deliver oxygen the way natural hemoglobin does. Biotech researchers have been developing HBOCs for decades because of their exciting potential applications. For example, these blood substitutes could be taken out on a battlefield where stocks of real blood could not be refrigerated and preserved, and given to wounded soldiers to send a rush of oxygen to their critical organs like the brain and the heart. That ability to pack an oxygen punch is what makes HBOCs a tempting target for a doper. Yet for all their promise, HemAssist and its ilk failed to reach the market. By 1998, HemAssist had reached Phase III clinical trials, the most advanced stage. But Baxter pulled back the drug when tests suggested it was not as safe as real blood—in an emergency room trial in Europe, more people died in the HemAssist group than in the real blood control group. PolyHeme, a version by Northfield Laboratories, Inc. of Evanston, Illinois, got just as far as HemAssist if not farther, our source says, before it too was pulled. The drug Hemopure, by Biopure of Cambridge, Massachusetts, become the first and only HBOC approved for human use when South Africa allowed it. But that approval was revoked in 2008. (That didn't please the United States Navy, which has been trying for a blood substitute for years). What went wrong? The death knell for Hemopure, and perhaps the symbolic end for these drugs, came in 2008 with the publication of a review article in the Journal of the American Medical Association. According to the data, the article said, these blood substitutes are connected to "significantly increased risk of death and MI" (myocardial infarction, more commonly called heart attack). The review article's main finding is that the blood substitutes showed "increased risks without clinical benefit." But, our source says, a fundamental reason for failure here is that the FDA process makes it extremely difficult to show the "clinical benefit" in this case. For one thing, proving that you're as good as or better than a current drug is one thing, but proving that you're as good as or better than real blood—which nature has had so much time to develop—is far more formidable. And secondly, our source says, because of the synthetic blood's nature and purpose, they only way to test it on humans was with people in dire straits: people who were too sick to have much chance of getting better, like the traumatic injury victims in the HemAssist trial. Not an easy way to prove your product's efficacy. Scientists haven't given up on HBOCs, but our source says the only way for the drugs to clear that regulatory hurdle would be to become so good they show a "Lazarus effect"—an ability to turn around patients who are very near to death. What does all this mean for Armstrong? The champion cyclist won his first Tour in 1999, the year after HemAssist discontinued its trials. So if the charge that he acquired and took it is true, it would mean he got samples of an unapproved drug that were created for clinical trials—something that wouldn't make the Food and Drug Administration very happy. And would it have helped him keep pedaling? In theory, absolutely. Animal tests demonstrated HemAssist's potential to carry oxygen in the bloodstream and to the vital organs. But, our source notes, researchers performed these tests on animals that lost a lot of blood; it's hard to predict the physiological effects on an athlete with a full blood supply who is looking for a boost. What we can say is that it's sad that a once-promising drug had to re-emerge in the news this way. Related Content: 80beats: Bendable New Particles Can Squeeze Through Tiny Blood Vessels 80beats: EPO: A Doping Drug Makes an Unwanted Cycling Comeback 80beats: Can “Biological Passports” Save Sports From Doping? 80beats: First Hard Evidence: Human Growth Hormone Gives Sprinters a Winning Edge 80beats: Geneticists Are On the Lookout for the First Gene-Doping AthletesImage: Wikimedia Commons