Neandertals had red hair! (OK, some)

The melanocortin 1 receptor (MC1R) regulates pigmentation in humans and other vertebrates. Variants of MC1R with reduced function are associated with pale skin color and red hair in humans primarily of European origin. We amplified and sequenced a fragment of the MC1R gene (mc1r) from two Neanderthal remains. Both specimens have a mutation not found in ~3700 modern humans. Functional analyses show that this variant reduces MC1R activity to a level that alters hair and/or skin pigmentation in humans. The impaired activity of this variant suggests that Neanderthals varied in pigmentation levels, potentially to the scale observed in modern humans. Our data suggest that inactive MC1R variants evolved independently in both modern humans and Neanderthals. 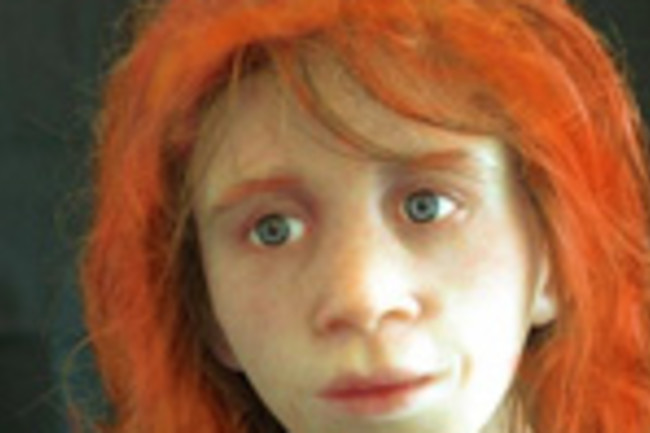 The researchers took two Neandertal remains, extracted samples, and amplified the MC1R region. They were sniffing for a region which exhibited differences from modern human populations because likely contamination with H. sapiens sapiens DNA would make it difficult to distinguish sequences which were identical by state. Luckily something turned up, a non-synonymous substitution of an A to a G which encoded the amino acid Arginine instead of Glyceine. This SNP doesn't seem to be found in modern human populations, they searched a sample size on the order of thousands, so if it is extant within our species it is at a very low frequency (and even if that particular SNP existed it is possible that it is a different mutation). They also checked to see if it might have been animal contamination, and that seems unlikely as the region around the SNP of interest didn't seem fishy. Multiple extractions were performed and this SNP was detected in many of them independently, suggesting that it is authentic ancient DNA. Finally, they also ruled out the likelihood that later chemical processes could have generated the SNP after the death of the individuals in question. The authors noted that comparisons with other taxa implied that this location was under functional constraint, which suggests that the amino acid change might have phenotypic implications. Now, one commonly thinks of these sorts of evolutionary genetic studies as historical sciences of inference, but this group went a little further. With some quick molecular genetic footwork they showed that the SNP in question does seem to result in reduced activity of the MC1R locus! From this the authors conclude that there was loss of function due to this genetic change at MC1R. Just to be sure they also checked contemporary loss of function mutations on MC1R, those known to result in fair skin and red hair, and the activity was indistinguishable. I won't go into the statistical inferences that they made from this N = 2. Yes, I know that they're p-values, but sometimes it is enough to say that it is rather suspicious that two different Neandertal samples from distinct locations (one in Spain, the other in Italy) yielded the same unique SNP, which is not found in modern populations. Neandertals and proto-Neandertal populations were extant across northern Eurasia for nearly an order of magnitude longer than modern humans have been, they had a long time to adapt to local ecological conditions. If low UV levels select for lighter skin, Neandertals should have had lighter skin. I have argued in this space that lightening of skin might be relatively recent in human evolutionary history; perhaps a response to poor nutrition due to the shift to agriculture. These data suggest rather that high latitudes and low UV are also sufficient conditions, as no one would posit that Neandertals practiced agriculture. Nevertheless, there were differences between Neandertals and the modern humans who succeeded them in terms of behavior and likely items consumed as food and their proportions. In all honesty I doubt that the diets were different enough that the selective pressures would have been very different from nutrient deficiencies, but I can't ignore the fact that several skin lightening mutations seem to have increased in frequency rather recently, tens of thousands of years after modern humans settled the north (e.g., at SLC24A5, SLC45A2 and OCA2). It may be that MC1R is under weaker constraint than these loci, which required a more stringent intersection of conditions to be driven to selection for loss of function. Nature is as it is, and our theories need to take into account the twists and turns she throws our way. Finally, I will add one thing:

Europeans are the most polymorphic of world populations on MC1R

, there are a host of moderate frequency alleles segregating in the gene pool. Some researchers have argued that this is evidence of relaxation of functional constraint, so that over time neutral loss of function variants built up within the gene pool. But because that time scale would be on the order of hundreds of thousands of years, earlier than human habitation of the north, others have argued that frequency dependent selection might have resulted in the emergence of many alleles which produced novel phenotypes subject to sexual preferences. Within Europeans the variation on MC1R is often hard to attribute to particular phenotypes aside from the combination of red hair and very fair skin. The authors in the above paper dismiss the possibility of gene flow, and that is certainly a straightforward implication when you have an SNP which doesn't seem extant in moderns. But, as John Hawks has long noted tens of thousands of years is a long time, and if this variation was relatively neutral in fitness in relation to a host of other loss of function mutants which generated light skin it might have simply gone extinct due to drift even if it crossed in human populations. The fact that it is found in two individuals separated geographically suggests it wasn't particularly rare or localized, but the presence of multiple red hair mutants among modern humans still leaves open the possibility that some of these "jumped" from Neandertals. Also remember that a loss of function mutation is often easy to generate from scratch, so an a priori the model of independent mutations is quite attractive (it might be more likely that Neandertal introgression might occur on gain of function mutants, which are harder to come by and so more valuable). 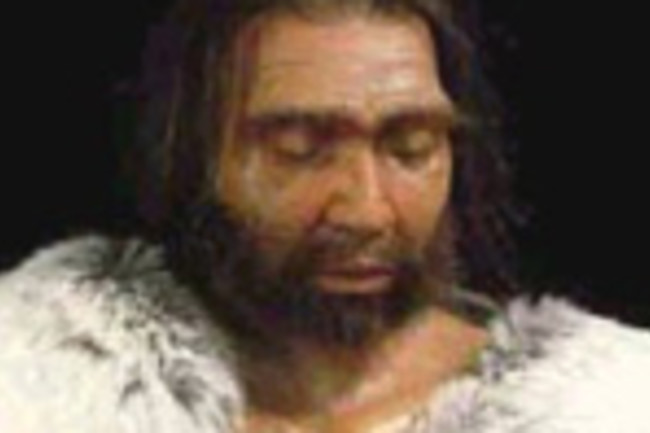 That's the science. But what's the cultural impact? Not much on a grand scale, this is just really cool. Nevertheless, the classic mental image of the Neandertal seems to be of a very dark-haired individual, perhaps a bit swarthy. Then there is the other image of Neandertals as a fairer population prefiguring some of the characteristics of northern Europeans. These physical types are illustrated by two works of first contact between Neandertals and modern humans, Jane Auel's Earth's Children series and Dance of the Tiger by Björn Kurtén. In Auel's work the less advanced Neandertals are a dark-haired race perceived to be subhuman by the blonde Nordic looking anatomically modern populations whom they encounter. Though Auel humanizes the Neandertals in many ways, it remains that on the great chain of being they are the inferior, doomed to extinction. Kurtén, in contrast, depicts the newly arrived modern humans as dark-skinned, and the Neandertals as fair-haired and light-eyed. His logic was simple, a newly arrived population from the south should naturally be less well adapted to high latitudes than a long resident one, and fair complexions were a northern adaptation (Kurtén's work also presents a peculiar twist in terms of characterizing exactly how modern humans were superior, and why the Neandertals went extinct). In any case, what does the data show? It seems clear that Auel's picture is not just implausible a priori, the recent data suggests that blue eyes are a relatively recent evolutionary development (on the order of 10,000 years), so the Nordic conquest of Neandertals could not have occurred because the Nordic phenotype itself derived from its antecedents relatively recently.^1 And the data above suggests that Neandertals themseves may have been rather fairly complected, so I will finish with a Wikipedia passage concering William Golding's 1955 novel of first contact between moderns and Neandertals, The Inheritors:

This last chapter is the only one written from the humans' vantage, and here Golding's style assumes full depth in the humans' ability to describe and comprehend what has happened. Interestingly, the humans see the

by whom they are beset as a type of forest demon whom they regard with fearful superstition.

Related: I've posted a lot about skin and eye color. Kambiz has more commentary. Note: Red hair emerges because of a lack of balance between the production of dark eumelanin and red-yellow pheomelanin. When both are down regulated in terms of production one obtains ash blonde hair. I am not totally clear as to why the authors above assume that pheomelanin production would also not be effected. Also, I obviously glossed over their molecular genetic confirmation that the SNP in question resulted in loss of function. First, I'm not that interested in molecular genetics outside of an evolutionary context. Second, that means that I would mangle their methods because of my weakness in this area. 1 - Auel also depicts black Africans and East Asians in their modern forms as well. Again, it seems unlikely that either of these types were extant 40,000 years ago. Though Auel aims for verisimilitude, in many ways her works are more likely science fiction than historical fiction, she takes regular modern human psychologies and transports them into exotic locales.