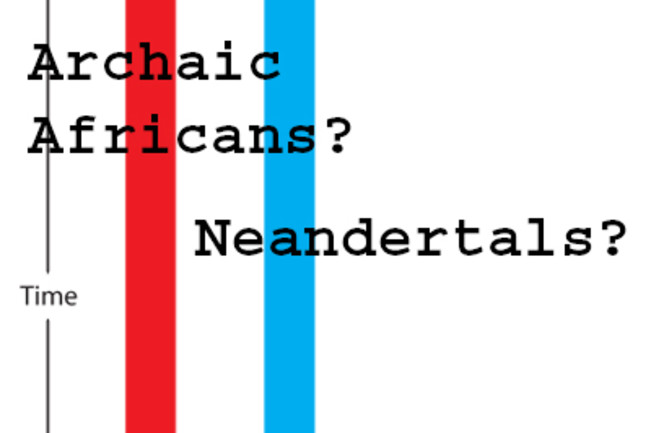 I've been talking about

introgression for a year right now

. I've been waiting for the papers on this topic to come out, and the first has. If you haven't, please read the posts from Greg and JohnHawks. Another paper is on the way, and Hawks promises something within this week. I strongly suspect that the Paabo group also has something up their sleeves. As I noted earlier the paper from Lahn et. al. is open access, free to the public. Read it, it's an elegant and compact piece of work, and I think they make a compelling case for

. The papers, and the commentary from Hawks and Cochran are pretty good, so I won't make this long. To the left is a graphic that I yanked out the Lahn paper. Two issues: 1) the phylogeny of the gene, MCPH1, shows that the modal allele, D, in modern human populations seem to be a long branch with a deep coalescence with the non-D alleles. It seems to have "jumped" and "swept" through human (mostly Eurasian) populations 30-50 K BP after our primary ancestors left Africa. 2) The longer schematic shows a rough representation of the demographic dynamic at work. What you see are two operationally distinct populations which meet, and there was a crossover event (hybridization) and the allele slipped from the Neandertals (or other archaics) into the expanding populations from Africa which constitutes the overwhelming preponderance of our ancestry as evidenced by neutral markers and most of the autosomal genome. And this is where

comes in. I mentioned last week that most beneficial alleles will go extinct, so multiple introductions are necessary. If you had an allele, say the D variant, within Neandertals, then each breeding event can be conceived of us a separate mutational event. The mathematical logic is clear: if the probability of fixation is 2s, then the probability of non-fixation is (1-2s), and if you conceive of the breeding events as isolated and distinct in time then the probability of non-fixation is (1-2s)^n, where n = number of breeding events. To make it concrete, if you assume that the selection coefficient favoring a D variant was 1%, that is, 0.01, then the probability of non-fixation drops below 1% with 230 successful breedings. In other words, even with minimal levels of interbreeding beneficial alleles will spread. Neandertals were a highly successful human ecotype, in hindsight it should surprise us if there possessed many alleles which might come in handy for the soon to be Europeans who just arrived from Africa (MC1R?). But, the interesting possibility with MCPH1 is that archaic human populations outside of the main trunk of our ancestry might have been indispensible in shaping our own species!