While stem cells can rapidly grow into any kind of new tissue, they aren't always able to encourage new blood vessels to grow so that the tissue stays alive. 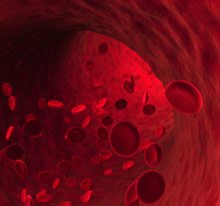 A new study may have hit upon another way to improve stem cells' ability to help repair damaged tissue.

But in a new study, published in the Proceedings of the National Academy of Sciences, scientists describe a way around the problem.

The researchers used nanoparticles to ferry a key gene into the stem cells, which caused the cells to recruit new blood vessels, thus fueling tissue growth.

The researchers are optimistic about the nanoparticle approach, however they state in the study that the effect may be transient. They note that

there was a significant increase in VEGF levels in mouse muscle two days following cell grafting, but VEGF levels produced by the cells dropped sharply after four days [The Scientist]. They say that using a virus to transmit the gene may be a better approach to stimulate new blood vessels over a longer period of time. However, the viral approach is not without risks--viruses can

integrate into the genome of cells and linger permanently, potentially causing cancer or immune reactions [Bloomberg].