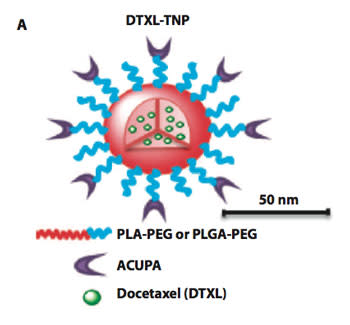 The nanoparticle. ACUPA is a protein that helps the particle attach to cancer cells; the red and blue pieces are polymers that make up the particle's shell.

One of the persistent problems in cancer treatments is that try as we might, it's hard to get drugs to attack just tumors: they nearly always attack patients' healthy cells too. Finding ways to get drugs to kill tumors, and tumors alone, is a major area of research, and a recent trial

in Science Translational Medicine indicates that one promising strategy, encasing the drug in a tiny particle that dissolves when it reaches a tumor, works better than just using the drug alone. Using so-called nanoparticles to deliver cancer drugs isn't a new idea

. But this paper, which involved trials first in animals and then in 17 people, is a sign that the technique is getting closer to the clinic. The team put together a nanoparticle that combined the best features---in terms of size, materials, and molecules that cloak it from the immune system, among other factors---of previous nanoparticles and filled it with docetaxel, a drug used for breast, lung, prostrate, stomach, and head and neck cancers. When they administered it to animals with breast, lung, and prostate tumors, they found that over the next 24 hours, docetaxel levels in tumors were 10 times as high as when it was merely injected. Levels in the blood were a hundred times as high as with a plain injection, probably because the nanoparticles and their cloaking molecules kept the drug from being filtered out. What's most exciting, though, is that when the team gave it to people with cancer, it accumulated in tumors even when they were given low doses, about 20% of the amount usually given in an injection. That suggests that you might be able to get similar efficacy in terms of killing tumors with less of the drug (and hopefully, fewer side effects). And oddly enough, two of the patients, whose particular cancers don't usually respond to docetaxel, saw their tumors shrink substantially. No one has looked into why yet, but it's interesting to think that perhaps delivering the drug this way can make it not only more effective, but effective against more types of tumors.