Update: After this post a researcher who is planning on publishing work on the genetic structure of Great Britain and Ireland and who has a very large N forwarded me a PCA which he gave me permission to repost. I've uploaded it here.

As you might infer from the post below I've started to get interested in African population structure. It's not just me. Readers regularly query me about the relationship of various groups, such as the Nilotic peoples who reside amongst the Bantu in northeast Africa. Additionally, there is a consistent problem with 23andMe generating weird results for people of African ancestry, usually those with East African ancestry.

But to figure out the nature of African variation in more detail we also need to give some thought to outgroups. My initial assumption was that using Tuscans would be sufficient, but several people pointed out that many Mediterranean groups have trace African admixture. Probably not enough to matter, but why take the risk? So how about looking to Northern Europe? The Utah Whites and Orcadians jump out as plausible alternatives, but there was a third which I thought I'd try out: the Irish. Last fall my friend Paul bought a bunch of 23andMe kits for family and friends, and convinced others of his acquaintance in Ireland to do likewise. Over the past few months we have given considerations to exploring the genetic relationships of Europe's "Atlantic peoples." We were thinking of terming it "The Milesian Project" (after the legendary Milesians who sailed from Galicia to Ireland). We now have 26 people with four Irish grandparents, from the modern Republic of Ireland, or with ancestors who derive from the Republic of Ireland. The vast majority of these are Roman Catholic, presumably the descendants of Gaelic speaking peasants. For various reasons The Milesian Project hasn't gotten off the ground, but, we do have a reasonable sample of Northwest Europeans now which is not the generic Utah white or Orcadian sample. Over the past few weeks the last dozen of the samples came in. There was mention of false positives in the ancestry painting, but I didn't think much of it. What I found surprised even me. I'm thinking of diversifying my African outgroups soon, so I wanted to poke around the Irish for weird outliers or people who were too closely related (you never know). Here's a plot of a supervised run where I set Utah whites and Yoruba as the two population poles: 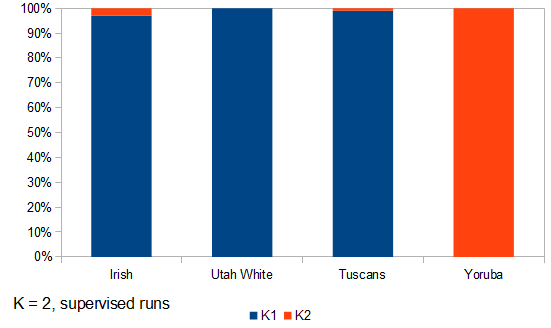 No need to do a double take. The Irish have more West African than the Tuscans! What's going on here? Here are the individual plots for just the Irish: 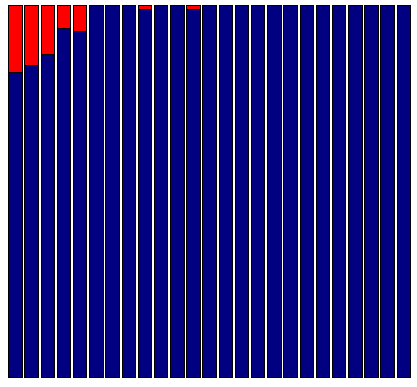 Most of the African ancestry is found in only five individuals. I asked Paul to inquire, and these were the individuals with unexpected ancestry paintings showing African ancestry. They'd all assumed it was some fluke. But here's a bigger coincidence: most of the Irish samples are from the east, but all of these individuals have most of their ancestry (at least 3 of 4 grandparents in 2 cases, and all 4 in the other 3) from a few villages to the west of Cork

in the south of Ireland! According to Plink these individuals are not particularly closely related (they don't show up in each other's Relative Finder feature either). I think the most plausible explanation for what's going on is that some West African seamen who arrived in coastal Ireland because of the British Empire intermarried with locals. The memory of their exotic origins has faded, but the genomic impact is clear. As for using Irish as outgroups, I'm just discarding these individuals for future runs. But I'm curious if any Irish readers have noticed anything strange about this region?