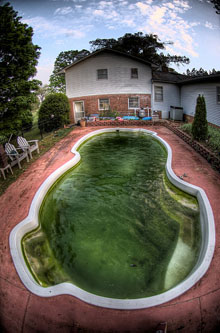 A study in Emerging Infectious Diseases reports that last summer in Kern County, California, cases of human West Nile virus jumped 276 percent following a 300 percent increase in home mortgage delinquencies.Aerial photos [pdf] showed that 17 percent of visible pools were green with algae blooms and probably breeding mosquitoes.The surge happened after a particularly dry season that should have suppressed mosquito numbers.But instead, populations of the urban strain (Culex pipiens quinquefasciatusi) increased rapidly and earlier than expected.This summer, the researchers noticed that a rural strain (Culex tarsalis), which is more virulent, has begun breeding in abandoned pools as well.

Making matters worse, the law requires outdoor swimming pools to be surrounded by a secure fence at least 2 meters high.What was supposed to keep out little kids is now keeping out mosquito-control workers trying to identify and treat neglected pools.