Monkeys Are Infected With HIV in the Name of Science 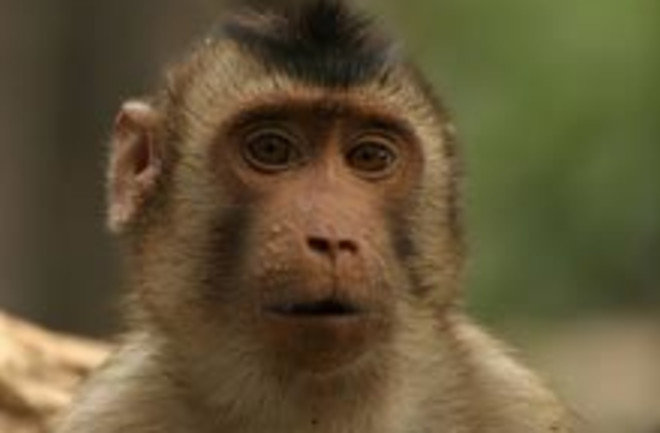 Researchers have tweaked HIV virus to create a strain that can infect monkeys, and say the development will allow better testing of vaccines and AIDS drugs.

Until now, AIDS researchers used monkeys infected with simian immunodeficiency virus, or SIV. The virus is similar to ours, but it's far from a perfect research tool.... Though SIV and HIV wreak similar havoc on their hosts' immune systems, drugs affect them differently. While that makes SIV useful for studying how the disease progresses, it's less useful for studying potential treatments [Wired News].

The new strain of HIV

was developed by altering a single gene in the human version to allow it to infect a type of monkey called a pig-tailed macaque [Reuters].

The researchers replaced one HIV gene with the SIV version of the gene, which blocks virus-killing proteins made by the monkey and allows the infection to take hold. Even this altered virus doesn't make the monkeys very sick, but while animal lovers may see that as a benefit, researchers see it as the final hurdle to overcome. In the new study, published in the Proceedings of the National Academy of Sciences, researchers say that the

genetically engineered virus, once injected into this monkey, proliferates almost as much as it does in people, but the animal ultimately suppresses it and the virus does not make it sick.... "The slight problem is the monkeys don't go on to develop AIDS, they don't get sick" [Reuters],

says lead researcher Paul Bieniasz. Researchers hope that macaques infected with the altered virus can soon be used to test vaccines and anti-retroviral drugs used in the early stages of the disease's progression. They'll also try to create a virus that causes full-blown AIDS in the monkeys, to allow for testing of later-stage treatments. While this may sound like a cruel line of work, Bieniasz points out that the current system of testing HIV drugs on monkeys with SIV may be skewing results, and holding back progress on life-saving medicines.

"If our research is taken further, we hope that one day perhaps in the not-too-distant future, we'll be able to make vaccines that are intended for use in humans and the very same product will be able to be tested in animals before human trials" [Reuters]

More From Discover
Health
What It Takes To Get a Vaccine FDA Approved
Health
Booster Vaccines Are Actually Pretty Common
Health
How Did Smallpox Anti-Vaxxers Compare to Those Today?
Health
Someday, a Robot Might Draw Your Blood
The Sciences
Self-Spreading Animal Vaccines Could Combat Human Pandemics
Health
Why It’s Harder for Many Transgender People to Access (and Trust) COVID-19 Vaccines
Recommendations From Our Store
My Science ShopDiscover STEM Kits
My Science ShopDiscover 2022 Calendar
My Science ShopStrange Science
My Science ShopElements Flashcards
Shop Now
Stay Curious
Join
Our List