Modeling the probabilities of extinction

Change is quite in the air today, whether it be climate change or human induced habitat shifts. What's a species in the wild to do? Biologists naturally worry about loss of biodiversity a great deal, and many non-biologist humans rather high up on Maslow's hierarchy of needs also care. And yet species loss, or the threat of extinction, seems too often to impinge upon public consciousness in a coarse categorical sense. For example the EPA classifications such as "threatened" or "endangered." There are also vague general warnings or forebodings; warmer temperatures leading to mass extinctions as species can not track their optimal ecology and the like. And these warnings seem to err on the side of caution, as if populations of organisms are incapable of adapting, and all species are as particular as the panda. That's why I pointed to a recent paper in PLoS Biology, Adaptation, Plasticity, and Extinction in a Changing Environment: Towards a Predictive Theorybelow. I am somewhat familiar with one of the authors, Russell Lande, and his work in quantitative and ecological genetics, as well as population biology. I was also happy to note that the formal model here is rather spare, perhaps a nod to the lack of current abstraction in this particular area. Why start complex when you can start simple? Here's their abstract:

Many species are experiencing sustained environmental change mainly due to human activities. The unusual rate and extent of anthropogenic alterations of the environment may exceed the capacity of developmental, genetic, and demographic mechanisms that populations have evolved to deal with environmental change. To begin to understand the limits to population persistence, we present a simple evolutionary model for the critical rate of environmental change beyond which a population must decline and go extinct. We use this model to highlight the major determinants of extinction risk in a changing environment, and identify research needs for improved predictions based on projected changes in environmental variables. Two key parameters relating the environment to population biology have not yet received sufficient attention. Phenotypic plasticity, the direct influence of environment on the development of individual phenotypes, is increasingly considered an important component of phenotypic change in the wild and should be incorporated in models of population persistence. Environmental sensitivity of selection, the change in the optimum phenotype with the environment, still crucially needs empirical assessment. We use environmental tolerance curves and other examples of ecological and evolutionary responses to climate change to illustrate how these mechanistic approaches can be developed for predictive purposes.

Their model here seems to be at counterpoint to something called "niche modelling" (yes, I am not on "home territory" here!), which operates under the assumption of species being optimized for a particular set of abiotic parameters, and focusing on the shifts of those parameters over space and time. So extinction risk may be predicted from a shift in climate and decrease or disappearance of potential habitat. The authors of this paper observe naturally that biological organisms are not quite so static, they exhibit both plasticity and adaptiveness within their own particular life history, as well as ability to evolve on a population wide level over time. If genetic evolution is thought of as a hill climbing algorithm I suppose a niche model presumes that the hill moves while the principal sits pat. This static vision of the tree of life seems at odds with development, behavior and evolution. The authors of this paper believe that a different formulation may be fruitful, and I am inclined to agree with them.

As I observed above the formalism undergirding this paper is exceedingly simple. On the left-hand side you have the variable which determines the risk, or lack of risk, of extinction more or less, because it defines the maximum rate of environmental change where the population can be expected to persist. This makes intuitive sense, as extremely volatile environments would be difficult for species and individual organisms to track.Too much variation over a short period of time, and no species can bend with the winds of change rapidly enough. Here are the list of parameters in the formalism (taken from box 1 of the paper): ηc - critical rate of environmental change: maximum rate of change which allows persistence of a population B - environmental sensitivity of selection: change in the optimum phenotype with the environment. It's a slope, so 0 means that the change in environment doesn't change optimum phenotype, while a very high slope indicates a rapid shift of optimum. One presumes this is proportional to the power of natural selection T - generation time: average age of parents of a cohort of newborn individuals. Big T means long generation times, small T means short ones σ^2 - phenotypic variance h^2 - heritability: the proportion of phenotypic variance in a trait due to additive genetic effects rmax intrinsic rate of increase: population growth rate in the absence of constraints b - phenotypic plasticity: influence of the environment on individual phenotypes through development. Height is plastic; compare North Koreans vs. South Koreans γ - stabilizing selection: this is basically selection pushing in from both directions away from the phenotypic optimum. The stronger the selection, the sharper the fitness gradient. Height exhibits some shallow stabilizing dynamics; the very tall and very short seem to be less fit Examining the equation, and knowing the parameters, some relations which we comprehend intuitively become clear. The larger the denominator, the lower the rate of maximum environmental change which would allow for population persistence, so the higher the probability of extinction. Species with large T, long generation times, are at greater risk. Scenarios where the the environmental sensitivity to selection, B, is much greater than the ability of an organism to track its environment through phenotypic plasticity, b, increase the probability of extinction. Obviously selection takes some time to operate, assuming you have extant genetic variation, so if a sharp shift in environment with radical fitness implications occurs, and the species is unable to track this in any way, population size is going to crash and extinction may become imminent. On the numerator you see that the more heritable variation you have, the higher ηc. The rate of adaptation is proportional to the amount of heritable phenotypic variation extant within the population, because selection needs variance away from the old optimum toward the new one to shift the population central tendency. In other words if selection doesn't result in a change in the next generation because the trait isn't passed on through genes, then that precludes the population being able to shift its median phenotype (though presumably if there is stochastic phenotypic variation from generation to generation it would be able to persist if enough individuals fell within the optimum range). The strength of stabilizing selection and rate of natural increase also weight in favor of population persistence. I presume in the former case it has to do with the efficacy of selection in shifting the phenotypic mean (i.e., it's like heritability), while in the latter it seems that the ability to bounce back from population crashes would redound to a species' benefit in scenarios of environmental volatility (selection may cause a great number of deaths per generation until a new equilibrium is attained).

Of course a model like the one above has many approximations so as to approach a level of analytical tractability. They do address some of the interdependencies of the parameters, in particular the trade-offs of phenotypic plasticity. In this equation 1/ω^2b quantifies the cost of plasticity, r0 represents increase without any cost of plasticity. We're basically talking about the "Jack-of-all-trades is a master of none" issue here. In a way this crops up when we're talking of clonal vs. sexual lineages on an evolutionary genetic scale. The general line of thinking is that sexual lineages are at a short-term disadvantage because they're less optimized for the environment, but when there's a shift in the environment (or pathogen character) the clonal lineages are at much more risk because they don't have much variation with which natural selection can work. What was once a sharper phenotypic optimum turns into a narrow and unscalable gully. Figure 2 illustrates some of the implications of particular parameters in relation to trade-offs: 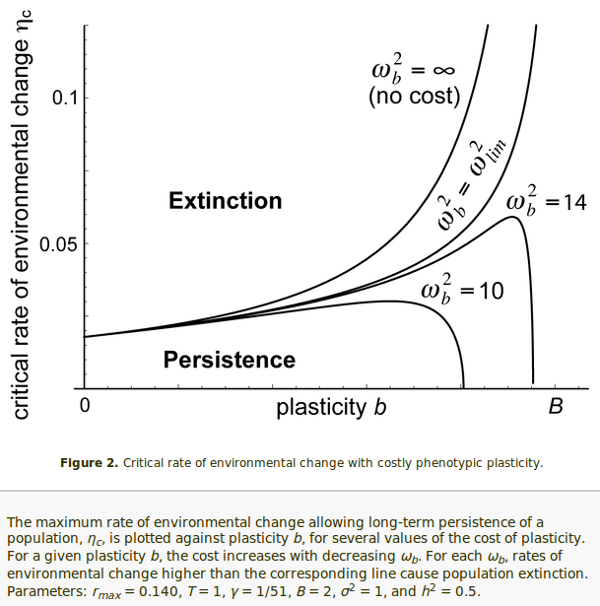 There's a lot of explanatory text, as they cite various literature which may, or may not, support their model. Clearly the presentation here is aimed toward goading people into testing their formalism, and to see if it has any utility. I know that those who cherish biodiversity would prefer that we preserve everything (assuming we can actually record all the species), but reality will likely impose upon us particular constraints, and trade-offs. In a cost vs. benefit calculus this sort model may be useful. Which species are likely to be able to track the environmental changes to some extent? Which species are unlikely to be able to track the changes? What are the probabilities? And so forth. I'll let the authors conclude:

Our aim was to describe an approach based on evolutionary and demographic mechanisms that can be used to make predictions on population persistence in a changing environment and to highlight the most important variables to measure. While this approach is obviously more costly and time-consuming than niche modelling, its results are also likely to be more useful for specific purposes because it explicitly incorporates the factors that limit population response to environmental change. The feasibility of such a mechanistic approach has been demonstrated by a few recent studies. Deutsch et al...used thermal tolerance curves to predict the fitness consequence of climate change for many species of terrestrial insects across latitudes, but without explicitly considering phenotypic plasticity or genetic evolution. Kearney et al...combined biophysical models of energy transfers with measures of heritability of egg desiccation to predict how climate change would affect the distribution of the mosquito Aedes aegiptii in Australia. Egg desiccation was treated as a threshold trait, but the possibility of phenotypic plasticity or evolution of the threshold was not considered. These encouraging efforts call for more empirical studies where genetic evolution and phenotypic plasticity are combined with demography to make predictions about population persistence in a changing environment. The simple approach we have outlined is a necessary step towards a more specific and comprehensive understanding of the influence of environmental change on population extinction.