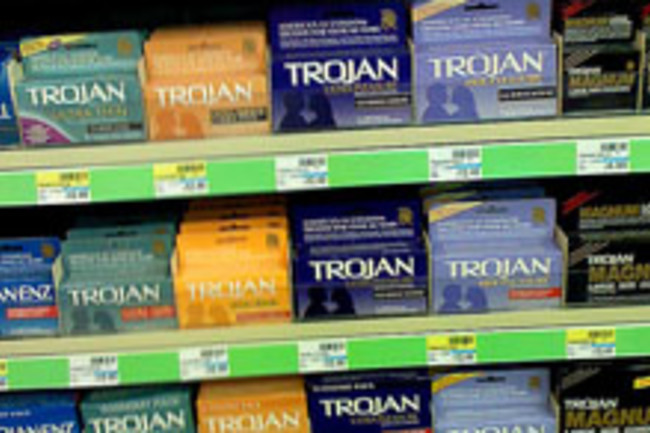 Condoms are effective at preventing HIV infection, but they are not foolproof: They can break, be used ineffectively, or not be used at all. Now, University of Utah scientists are developing a "molecular condom" gel that could help women eliminate (or, at least, reduce) the remaining and persistent risk of HIV infection. The gel would be inserted into the vagina, and would turn semisolid when semen touches it, responding to pH levels in the vaginal tissues and forming a mesh of cross-linked polymers to trap the virus. It might also prevent other STDs like herpes and HPV, and even act as a means of birth control. All a woman would need to do is insert the gel a few hours before sex. Science Daily reports:

"The first step in the complicated process of HIV infection in a woman is the virus diffusing from semen to vaginal tissue. We want to stop that first step," says Patrick Kiser, an associate professor of bioengineering at the University of Utah's College of Engineering. "We have created the first vaginal gel designed to prevent movement of the AIDS virus. This is unique. There's nothing like it."

With infection in women soaring as high as 60 percent in areas like sub-Sahara Africa and South Asia, the power to wear condoms ultimately rests in the hands of their partners. This new gel could potentially give the women more control over their own infection rates. Clinical trials will begins in a few years—and while we'll remain hopeful, it’s hard to forget the disappointing path that other microbicides trials have taken, by not preventing HIV and even increasing the risk of its transmission. Related Content: 80beats: HIV Vaccine? 80beats: Trial Canceled Set Back For AIDS Research