Everyone has their own collecting quirk. I myself collect animal skulls, inconveniently large earrings and unusual stories of infectious disease cases and outbreaks. To each their own, yes? I've decided that, instead of stockpiling these stories away in some recess of my brain, I'll be sharing them online in a new recurring series on Body Horrors called Microbial Misadventures.

Microbial Misadventures will cover instances (and incidents!) where human meets microbe in novel and unusual circumstances that challenge our assumptions about how infections are spread. Stories of unconventional pathogen transmission that make you go "huh!" and realize that there really is no way to escape these microbes, for they will invariably find a way to gain the upper hand. These will be the kind of stories you might share at a cocktail party or, if you have accommodating dining companions, at the dinner table.

Misadventures and mishaps, case studies and the plain old weird: this is Microbial Misadventures. For the first in the series, looking at an infection of gastrointestinal anthrax following attendance at a drumming event.

When you think of drum circles taking place in the United States, visions of hippies, Birkenstocks and the vibrant green lawns of private colleges may appear. The bacteria Bacillus anthracis, or anthrax, does not often materialize alongside the skunky mix of patchouli and ganja hovering above the crowd in one’s visions of (ar)rhythmic drumming events.

But in December of 2009, public health workers and the FBI received both a scare and a bit of interesting insight into the extracurricular activities of this spore-forming bacteria when a gravely ill young woman living in New Hampshire tested positive for anthrax. She had recently been hospitalized with severe flu-like symptoms, nausea, vomiting and abdominal cramps. A round of blood cultures and exploratory surgery led to a diagnosis of gatrointestinal anthrax infection, one of the rarest forms of this type of infection. Inhalational (respiratory) and cutaneous anthrax are far more common.

Ingesting an anthrax spore via the consumption of raw or undercooked meat of herbivores is the most common route of gastrointestinal infection but a quick study of this vegetarian's eating habits suggested that there was another side to the story. This past decade has made public health authorities and governmental officials rightly tetchy about any appearances of anthrax in the United States - anthrax is widely regarded as the most likely agent to be used in acts of bioterrorism – we saw as much with the 2001 anthrax mailings.

Instead of an act of bioterrorism, however, it was determined that the anthrax appearance was the result of aural terrorism - a week earlier the patient had attended a drum circle in a community center in Durham and several of the drums were made of animal skins harboring, unbeknownst to the joyful percussionists, healthy colonies of anthrax spores. 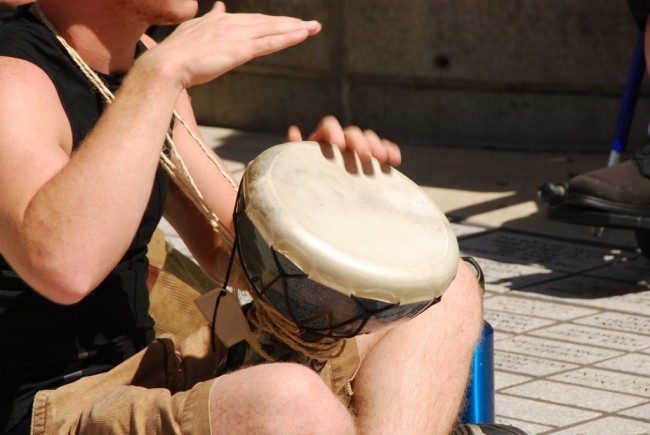 A drummer playing in a drum circle at the Eugene Oregon Saturday Market. Image: TFoxFoto.

For those unfamiliar with the largely improvisational affair that is a drum circle, the CDC's report on the case sums up the event well:

"These drumming circles typically involved 30–40 persons from the local community sitting in a circle and drumming or dancing. They occurred monthly and lasted approximately 2 hours. Many attendees brought their own drums, although the community organization had dozens of drums stored in the basement for use during these events.

A total of 72 persons attended the December 4 event, and a total of 59 drums were present, including 17 drums that participants brought from home (1)."

An investigation of the community center’s "drumming room" detected the bacteria on two drum heads and a few electrical outlets. Apparently, the spores had been aerosolized by the drumming and dispersed a cloud of anthrax that traveled through the facility. Some spores may have landed on food that the woman later consumed. As unusual at this case is, this isn’t the first time that drums with animal skins have been implicated in anthrax infection. In 2007, two drummers were infected with the cutaneous form of anthrax when they brought back goat hides from the west African country of Guinea to be shaped into tom-toms.

This is a unique and instructive case on the vagaries of bacterial infection: a naturally occurring case of anthrax in a country free from the bacteria associated with a tired and tone deaf ‘60s trend. The worst that should have resulted from this woman’s drum circle experience was a bad nostalgia hangover. Instead she was gravely ill and hospitalized for two months.

The CDC has a nice factsheet on anthrax for drummers and drum makers with suggested precautions to take with animal-hide drums.

Ten hour drum circles (!) at the Occupy Wall Street movement - dubbed the "sound of occupation" - threatened the sustainability of the protests. There is an excellent article at the Sounding Out blog that discusses the drums at the Occupy movement and then explores the history of drum circles and their political and social importance to Native Americans, the black power movement and to Caribbean and African slaves in New Orleans. Great read. At The Economist, drum circles are healing not just minds but fostering business relationships and team-building events. References