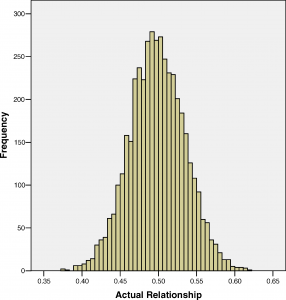 One of the more fascinating things about getting much of your child's pedigree genotyped is that one can ascertain true relatedness to various relatives, rather than just expected relatedness. For example, 28% of her genome is identical by descent from my father, while 22% is from my mother. She is 26% identical by descent with one uncle, and 24% with another. More practically, the understanding of patterns realized and concrete genetic relatedness within families allows us another avenue into teasing apart heritability. Though this method has been around for more than half-a-decade, I find it curious that when I post on it some commenters immediately make objections to twin studies. Why? Because they assume that the analysis had to be a twin study because they don't know of the genomic methodology! But on a broader evolutionary scale, does this matter? Two of my siblings have a relatedness of 41%. In other words, as you can see in the histogram there is a wide variation in relatedness. Might this perhaps impact social relations? One can imagine genetically more similar siblings aligning against those who are dissimilar. Or not. I am skeptical that this would apply to humans, but I do wonder about organisms with larger broods. If we don't find much variation on the scale of siblings, despite genetic variation (and therefore, likely phenotypic tells of similarity), then I would hazard to suggest that inclusive fitness is not quite the razor sharp discerning tool that some posit it is. Rather, it is part of the broader swiss army knife of behavioral ecology.