In a driving simulation, people who started using recreational cannabis prior to age 16 had difficulty following the rules of the road. 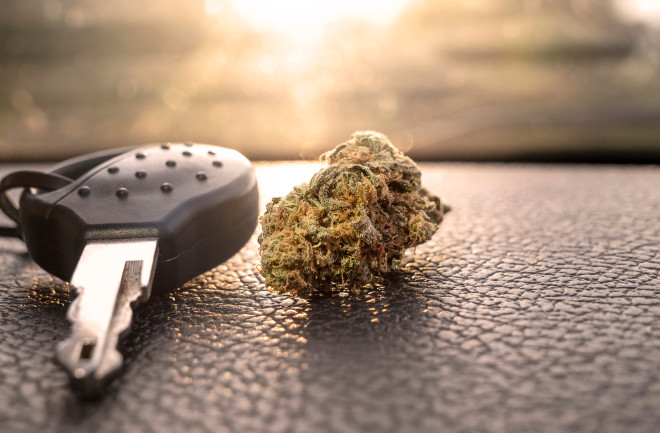 Drugs and driving don’t mix. But can weed affect your performance on the road even when you’re not high?

Yes, says a new study published this week in Drug and Alcohol Dependence. Researchers used a simulated driving test to see how well recreational marijuana users followed the rules of the road when they were sober. The result? Even sans intoxication, some of the drivers hit more pedestrians, ran red lights and drove outside their lanes more often than their counterparts who had never used cannabis.

But the results come with a caveat — not all marijuana users performed poorly while navigating their virtual vehicle. Those who made the most mistakes were chronic, recreational users who started using the drug before age 16. Otherwise, those who started using marijuana after their mid-teens performed just as well, and sometimes better, than those who had never used cannabis.

While many studies focus on what marijuana does to physical and cognitive abilities when users are high, little data exists on how the drug affects people when they’re not. That’s why Staci Gruber, a co-author and director of the Marijuana Investigations for Neuroscientific Discovery (MIND) at McLean Hospital, says she wanted to look at the differences in driving abilities between recreational marijuana users and non-users — when they were all sober.

Heavy users were defined as those who used cannabis at least five days per week and reported at least 1,500 lifetime uses of the drug. The researchers asked participants to abstain from use 12 hours before the test, and if they showed up high, they were rescheduled for a later date.

Though the study has a relatively small sample size, with a total of 44 participants counted in the final analysis, the researchers observed statistical significance between the number of driving mistakes made by people who started using cannabis before they were 16 and the rest of the cohort.

“When we split those groups and look at people who began using early, before the age of 16, we see that the differences that we’re observing are localized only to that group,” says Mary Kathryn Dahlgren, a co-author and research fellow for the MIND program. “The late-onset users don’t look different from the non-users. I think that’s really important.”

And the study backs up previous research that cognitive impairments seem to be the worst in users who start smoking as young teens. Late-onset recreational use, on the other hand, doesn't always have the same detrimental effects, and neither does medical marijuana. Gruber says this mainly has to do with how different groups of people use marijuana, and that not all cannabis products are designed to get people high.

“You cannot take from this study and sort of generalize what you would expect to see in medical cannabis patients," Gruber says. "Much of what you're likely to see is related to the product choice of the consumer.”

Gruber says this report was a pilot study to see if any differences in performance would occur between non-users and different types of recreational users. Even with statistical significance, it's still too early to tell exactly how the driving skills of cannabis users are affected in real life.

And the study didn't record data from every subgroup of marijuana users, either. Gruber says there is still more to understand about how driving abilities are impacted in infrequent recreational users, medical users and people who used to smoke marijuana but quit.

Thomas Marcotte, co-director of the Center for Medical Cannabis Research at the University of California, San Diego, did not help conduct the study, but agrees that more research on the topic is needed. Although he was surprised to see an effect in such a small sample, he says more data is needed to figure out exactly how cannabis is affecting people on and off the road.

Currently, he says he's analyzing data for a separate study on the effects of cannabis in drivers as well. But only time, and lots of trials, will help sort out marijuana's effects.

"Replication is key," Marcotte said in an email.

Everything Worth Knowing About Marijuana

Our Ancestors Got High, Too

Why Does Marijuana Cause Panic Attacks in Some People?