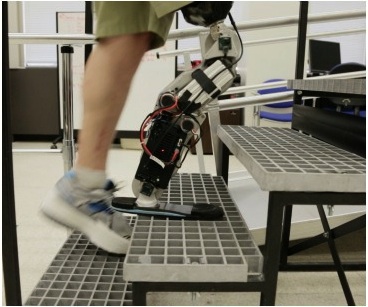 , the tallest building in the Western hemisphere, using a prosthetic limb he controlled with his thoughts. Many prosthetics work using myoelectric devices, where the limb, such as this bionic hand

, moves in response to muscle contractions. But since each muscle contraction can control only one motion, the range of motions is limited. To get more nuanced control of prosthetic limbs, the Rehabilitation Institute of Chicago, which sponsored the indoor climb-a-thon Vawter took part in and outfitted him with the leg, is working on developing thought-controlled prosthetics. To make the leg work, nerves from Vawter's hamstring were wired to the prosthetic, which was designed by Michael Goldfarb at Vanderbilt University. The Institute has been providing thought-controlled arms to patients for a few years, according to a release

. DARPA, the Defense Advanced Research Projects Agency, is also testing a mind-controlled arm, where a chip implanted in the brain

transmits signals to a prosthetic limb. Mind-controlled doesn't always mean faster, though: There are leg prosthetics out there that let amputees speed along without needing mental input, most famously Flex-Foot Cheetahs

, the lower limb that allowed an amputee to outperform able-legged competition in the 2012 Olympics. That prosthetic is more along the lines of a springy, athletic peg leg. But for the average user, some delicacy of control might be preferable to record-breaking speed.

Image via the Rehabilitation Institute of Chicago