Love is not a hardwired battlefield

Judging by some of the amusing search queries I find every Friday people have a wide range of tastes and fetishes when it comes to pornography. From what I can tell the realized phenotypic interval in mate choice is less varied and eye-opening, but exists nonetheless. Why? Is there a rhyme or reason, or is it simply random chance and the necessity of the biological clock ticking? These are not issues which aren't discussed or mooted thoroughly regularly. The popular science literature is littered with hypotheses from social and evolutionary psychology. How else could you have a books such as The Mating Mind: How Sexual Choice Shaped the Evolution of Human Nature and Survival of the Prettiest: The Science of Beauty. This is sexy science by definition. Not Physics Letters. There are three broad issues which have interested me in the domain of attraction and evolution. First, what is the character of cultural universals of beauty rooted in biological preferences? Second, what is the character of cultural variation in beauty rooted in contingencies or local conditions? And third,

what are the genetic and non-genetic factors in individual mate preference?

In this post I'll focus on the last. Not to put a fine point on it: are you born with a "type," or is your "type" a matter of chance and necessity after you are born? An interesting twist on the second issue is that one phenomenon which falls into the "not born" but biological category is the process of sexual imprinting. For example, you may exhibit attraction to individuals who resemble your opposite sex parent.* The clear connection to the presumed "Oedipus complex" of this probably explains it prominence. A new paper in The American Naturalist aims to examine the question of realized variation individual preferences with a huge sample of twins, monozygotic and dizygotic. By realized, I mean that they focus on the people with whom you actually pair up, not your ideal avowed preference. Variation in human mate choice: simultaneously investigating heritability, parental influence, sexual imprinting, and assortative mating:

Human mate choice is central to individuals' lives and to the evolution of the species, but the basis of variation in mate choice is not well understood. Here we looked at a large community-based sample of twins and their partners and parents...to test for genetic and family environmental influences on mate choice, while controlling for and not controlling for the effects of assortative mating. Key traits were analyzed, including height, body mass index, age, education, income, personality, social attitudes, and religiosity. This revealed near-zero genetic influences on male and female mate choice over all traits and no significant genetic influences on mate choice for any specific trait. A significant family environmental influence was found for the age and income of females' mate choices, possibly reflecting parental influence over mating decisions. We also tested for evidence of sexual imprinting, where individuals acquire mate-choice criteria during development by using their opposite-sex parent as the template of a desirable mate; there was no such effect for any trait. The main discernible pattern of mate choice was assortative mating; we found that partner similarity was due to initial choice rather than convergence and also at least in part to phenotypic matching.

Much of the paper is given over to a review of previous research. Some of these did find heritable preferences (e.g., some women might have a stronger preference for tall men than other women, and this can be explained by genetic differences across the range of women). And you've probably encountered the stuff on MHC, opposite sex imprinting, etc., in the mainstream press. The MHC results are usually of the form "women prefer the smell of t-shirts of men with different MHC profiles." Sometimes the results are really strange and counterintuitive. One study was of the form "women prefer the smell of t-shirts of men with the MHC profiles similar to their fathers." And from this a lot of reasoning about how genomic imprinting manifested ensued. Though I hadn't encountered John Ioannidis' work on the prevalence of false positives in the research literature yet, I started wondering how so much strange, often contradictory, results were getting through peer review. Who is an honest individual to trust? In this paper the authors basically seem to be contending that in previous studies with smaller sample sizes the random noise ended up meeting the statistical significance threshold. You do enough studies, that will happen, and you'll find that those false positives are the ones that will be published, especially in a sexy field like social or evolutionary psychology. So what did they find? Basically they had a total sample size of over 20,000 Australian twins and their parents consisting of pair bonds of various lengths. They didn't have values for all of the individuals for the traits of interest, so the real sample size for a given trait may be considerably smaller. But, they're still at least an order of magnitude larger than the N of the range of studies which reported positive findings and which they reviewed in their introduction. This is a paper with tables, not charts. So let's start with table 3. On the left you have the mean value for a given trait. Some of these are transformed from categorical to numerical. For example, religiosity is a number which corresponds to a rank order in the frequency of church attendance. The second pair of columns has the correlation between partners. Age is a very impressive correlation. I've seen the same value for educational attainment in the General Social Survey, in that I actually ran that specific correlation and came out with that result. The attitudes trait is really a composite which measures social liberalism/conservatism. It is relatively high along with religiosity. The low values for personality variables really make me just wonder how good the measures of personality which psychologists have at their disposal are. Height and income are surprisingly low correlations. Finally, in the last column they look at the heritability of the trait itself. For example, within the Australian population nearly 70% of the variation in body mass index in the population is controlled by variation in genes in the population. Many psychological traits are around 25-50% heritability. Notice the high value for height. This is in keeping with what you find in other developed nations where nutritional inputs are saturated.

A major issue that they wanted to test was whether partners become more similar over time, or whether their similarity was a function of assortative mating. For example, do their body mass indices converge over the duration of their relationship? Overall they found that no, there was no convergence. The correlations just didn't vary as a function of relationship length. The similarity on a trait like religiosity is apparently mostly a function of initial matching. But what about family background? Assortative mating can be viewed simply as a matter of individuals expressing their preference, but obviously choices aren't made in a vacuum by H. economicus. And yet this is a very interesting question for any given trait that can't be taken for granted in terms of the answer.

. Rather, there was about equal effect of genetics and "non-family environment," which is really just an unaccounted for grab-bag. Harris' thesis was, and is, that peer effects account for much of this residual. So what's going on with mate choice specifically? Below you see a list of correlations for traits. The abbreviations are straightforward. MZ = monozygotic, DZ = dizygotic, F = female, M = male, and OS = opposite sex. So there isn't an MZOS because monozygotic twins are the same sex, by definition. The correlation differences between MZ and DZ twins are pretty comprehensible. MZ twins share 100% of their genes. DZ twins share an expected value of 50% (in reality, there's a standard deviation of 3%). But notice the last six rows. There's really not much difference between MZ and DZ pairs here. That's strongly indicative of marginal additive genetic variance effecting mate choice. In this table it is clear that twins’ partners were not more similar in any trait to the twins’ opposite-sex parent than to the twins’ same-sex parent. That's a strike against the imprinting thesis. 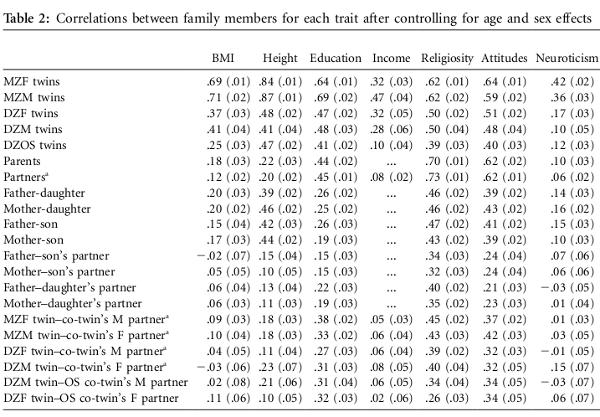 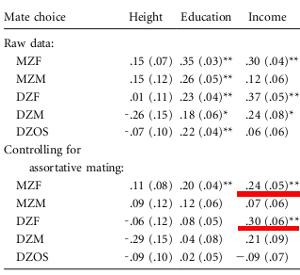 Finally, there is some evidence of family effects. In particular, there was statistically significant results for female MZ and DZ twins in terms of correlations in their choice of mates for income & age. What does this mean? The authors imply that this is suggestive of family socializing effects. In other words, parents have particular expectations of the type of man that a daughter is supposed to bring home, and the daughter complies with those expectations on many occasions. Notice that there's not a difference between MZ and DZ females for income. In fact, there's a slight tendency for there to be more correlation between DZ twins! (I wouldn't make much of this, look at the standard errors in the parentheses). The individual preference difference here seems to be marginal. Most of the correlation is due to family background and the individual's own trait (e.g., high earning females pair up with high earning males not because they have genes which predispose attraction to high earning males, but because they have a tendency to pair up with men who resemble them). Where does this leave us? First, there are obvious limitations to this study. Heritability estimates are sensitive to environmental background effects. In India the correlation between twins and siblings in terms of the religious identity of their partners is going to be very high. That's because of cultural norms. If the offspring have particular preferences, they're going to be tightly scaffolded by the parameters set by the extended family. The authors themselves admit that they were focusing pair bonds. Studies of "speed dating" and such might give different results because humans may facultatively engage in different strategies in different circumstances. In a non-developed nation the class effect will probably be stronger, bosting the "family effect" of income correlation, because the range is going to be so much higher in terms of the realized impact of income and household maintenance (i.e., poor people in developed nations live well enough to get fat). I think the big picture is to be very cautious of sexy positive results from sample sizes in the hundreds. Especially if you double check the literature and see results pointing in different directions! Citation:

* We're talking purely of heterosexuals here and in the study below.