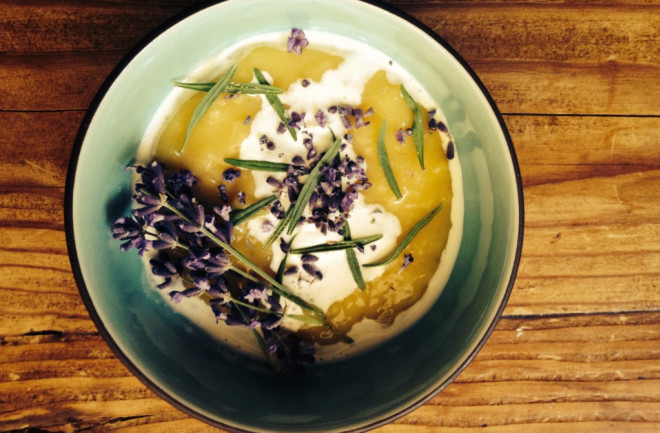 Lemon curd pudding lavender creamPhoto credit: Sue O' Bryan (Foodlander/Flickr) How does sipping a cup of lavender tea with honey sound? Soothing? Fragrant? Then imagine stumbling upon an open field of lavender flowers. The lavender plant, genus Lavandula, comprises 39 flowering plant species, all of which are easily recognized by that trademark color and signature fragrance. The most popular species of lavender is L. angustifolia, commonly known as English lavender and lauded for having the sweetest fragrance among lavender plants. Lavender flowers are primarily grown in order to extract the essential oil for both medical and culinary uses. The distinctive purple flower is popular for its calming abilities, extensively used in aromatherapy alongside other herbs. Lavender is additionally famed for its healing properties. French chemist, René-Maurice Gattefossé realized the usefulness of lavender oil as a healing essence when he plunged his burned arm into a tub of liquid containing lavender oil, later noting quick tissue regeneration with little scarring [1,2]. Following Gattefossé’s observation and subsequent experiments using lavender oil in military hospitals during World War I, lavender is also used today as an antiseptic and anti-inflammatory [1]. As an herb, lavender of course has a dedicated fan base in the culinary world; the fragrant flower is the star of recipes such as lavender cake, lavender shortbread, and even lavender and honey roasted chicken. Analysis of lavender oil reveals the primary compounds responsible for the scent are linalyl acetate and linalool (pronounced lin-ah-low-awl). Both have been cited to contain various pharmacological properties that aid in relaxation, such as anti-anxiety, anti-depressant, [1] and relaxant of vascular smooth muscles [3].

Minor volatile components that contribute to the scent of lavender essential oil include (E)-β-ocimene, (Z)-β-ocimene, terpinen-4-ol, 1,8-cineole, camphor, and limonene.

But make no mistake. There’s nothing “minor” about these compounds when it comes to lavender flavor. According to the flavor network by physicist Albert-László Barabási, North American and Western European cuisines like to pair ingredients that share many flavor compounds. Camphor confers a woody, evergreen scent and is one of the primary volatile compounds in dried rosemary leaves; this makes lavender and rosemary a comforting combination. Further, linalyl acetate, linalool, and many of the minor volatile components of lavender oil can also be found in lemon peels and lemon essential oil [4]. Lavender and lemon are such celebratedculinarycompanions that the two are practically best friends. Want to try cooking with lavender for the first time? Relax; it’s not as challenging as it seems. Just take a deep breath and try out this simple lavender sugar recipe. References cited