Update:Another post on this topic at my other blog. A few days ago I pointed to a new paper, Evidence of Still-Ongoing Convergence Evolution of the Lactase Persistence T-13910 Alleles in Humans. Knowing my interest in the topic you might assume that I would be "all over this." Well, I finally read the paper (twice) and I have to say it's a really interesting piece of work. 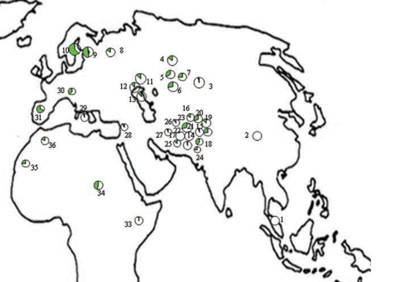 To the left is a map of the proportion of the T-13910SNP near the LCT locus in selected populations. In Eurasia the correlation between this allele and "Lactase Persistence" (LP) is very strong (r ~ 0.97 in terms of LP phenotype and frequency of T-13910 with a p of less than 0.001) . Functional studies have shown that the presence of T-13910 results in the maintenance of transcription of the enzyme which breaks down lactose sugar in milk. The phenotype is interpreted in the "dominant/recessive" model, one copy of the allele is all that is needed to be in a state of LP. So, if a population has a 0.50 proportion of the LP conferring allele, via the Hardy-Weinberg Equilibrium we know that 75% of the population exhibits the LP phenotype. A close look at the map shows us a few things. First, the allele of interest is modal in northern Europe. That is, its frequency is the highest there. This is no surprise as LCT has some of the strongest signatures of selection within the genomes of Europeans studied so far (the longest "haplotype block"). But, do note that the LP conferring allele is found throughout western Eurasia, and even into into nothern Africa.

Though it is most frequent in northern Europe, that does not necessarily mean that the T-13910 arose there

To infer the origin of T-13910 and trace its evolutionary history the authors of the paper looked at a small region (a 30 kilobase span) around the SNP and cataloged the various alleles extant within the populations under consideration for this study. In short, they separated two groups of alleles, one cluster associated with the T-13910 variant, and another associated with C-13910, which is the ancestral "non-Lactase Persistent" (NLP) allele. They found several alleles closely associated with T-13910, but, the interesting result was that the LP conferring alleles separated into two phylogenetic clusters derived from separate antecedent NLP alleles. In other words: it seems that there were multiple mutations of the from C to T that resulted in the emergence of LP within the Eurasian heartland! We already know that there are other SNPs associated with LP in the Middle East and Africa, but these were at separate locations near LCT. The chart to the left illustrates the relationships. The sizes of the circles are proportional to the frequency of the various alleles within the study population. H98 is a variant that is found through Eurasia and into northern Africa. It seems to have emerged within the last 10,000 years and swept across Eurasia more recently (recall that Neolithic Europeans on the order of 6 to 7 thousand years ago seemed not to be carrying the allele). The rarer alleles are found in a few central Eurasian populations; Udmurts, Mokshas, Erzas, and Iranians. Certainly it is likely that these alleles exist in other populations, but the location of these groups might tell us something about the selection pressures which allow for the emergence of LP conferring alleles. The first three groups reside on the western side of the Urals in Russia, while Iran spans Central Asia, the Middle East and South Asia. The authors also point out that the antecedent allele from which H98 derives is very common in central and eastern Eurasia (into China). To me this suggests that in Eurasia LP alleles arose in what Halford Mackinder would call "the Heartland." The present of other LP conferring alleles which arose more recently, in the last few thousand years, implies that the selection pressures have continued to be operative in this region. I have also wondered if these new alleles might be a "better" somehow, perhaps with fewer negative fitness implications. In any case, the fact that groups like the Basques have a higher frequency of LP than the French, even though the allele is central Eurasian in origin, brings home the force of selection. That is, this allele swept through populations where it conferred a fitness benefit. As an analogy, imagine a fountain gushing water. The puddles around it will emerge at the lowest points, not necessarily the nearest ones. So it is no surprise that peoples and regions closer to the likely point of departure of the allele may exhibit it to a lower proportion that populations as far distant as the Basques and the Fulani. This just reiterates that adaptive alleles can be radically and quickly decoupled from demographic mass movements, as they sweep across populations and disregard phylogenetic considerations. The Basque may be more closely related to the Sicilians in regards to total genome content, but when it comes to that one particular SNP which confers LP they are, on average, more likely to be similar to Pathans, Fulani and Finns. Finally, we have to take a step back and consider these findings in the grand arc of human history. These results imply a genetic revolution 5 to 10 thousand years ago, and likely closer to 5. We do know that the Neolithics likely didn't bring this allele to Europe, the ancient farming Central Europeans 6-7 thousand years ago didn't have them. Rather, it seems likely that they arose on the Eurasian steppe. From this steppe the adaptive rays shot outward, south and east to India, to the most distant west in Europe, and even arcing across the western fringe of Africa and across the Sinai. I have said above that adaptive alleles may decouple from gross phylogenetic trends, but, it seems a bit much to assume that T-13910 rose to prominence via village-to-village bride exchange or the occasional sojourner. Something to think about.