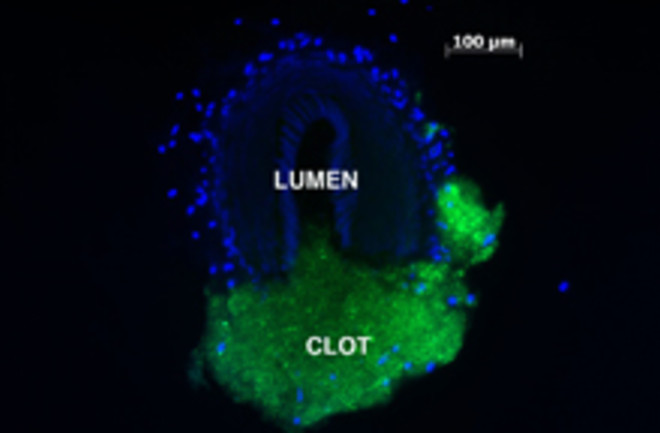 Hot on the heels of the story of lab-built red blood cells that DISCOVER covered on Tuesday, a different team of scientists have announced another step forward. Bioengineer Erin Lavik announced that her team built synthetic platelets that, when given intravenously to rodents, could slow their bleeding after a cut. The study appears in Science Translational Medicine. Your normal platelets exist in the bloodstream and use proteins to bind together and close off the bleeding when you get a cut. Lavik's synthetic version is a nanoparticle that her team injected into the rodents intravenously.

The synthetic platelets augment this process, bonding with natural blood platelets and acting as a nanostructure boosting the natural platelets' ability to form a solid barrier that stops bleeding [Popular Science]

. The rodents with synthetic platelets stopped bleeding 23 percent faster than those without. Lavik's particle is a third the size of a natural platelet, and the team was careful not to make it too sticky.

"There's a balance between the two edges of the sword--bleeding too much and clotting too much," says Mortimer Poncz, a physician at the University of Pennsylvania Medical School, in Philadelphia, who was not involved in the research. "You don't want to stop bleeding in the leg but die of a heart attack or have stroke" [Technology Review]

. The scientists now must do pig and then human tests to determine the platelets' effectiveness in people. So it would take years before synthetics nanoparticles are slowing the bleeding for accident or battlefield trauma victims. Lavik, though, is hopeful can be just as helpful for humans.

“All we’re doing is leveraging what biology does naturally,” Lavik said [Bloomberg]