Kissing & the science of humanity 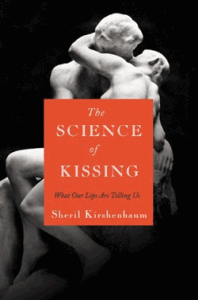 I approached Sheril Kirshenbaum's The Science of Kissing: What Our Lips Are Telling Us with some trepidation and excitement. The former is a consequence of my hypochondria and its associated germophobia. I have no aversion to kissing in my own life (apologies for divulging personal information), but I did have some worries about having to read about other humans engaged in such an act of hygienic daring. And yet I was excited because I am interested in multidisciplinary explorations of human behavior. And of course I was familiar with the author's oeuvre, and was expecting an engaging and wide-ranging exploration of the topic at hand. I was not disappointed. The Science of Kissing is an intellectual full-court press; every conceivable discipline of relevance is brought into the mix. History, ethnography, ethology, neuroscience, evolutionary biology, physiology, and epidemiology, all receive attention, to name just a few of the more prominent lenses which the author fits over the course of the narrative. In other words you're presented with an intellectual buffet. A well rounded meal will require you to sample widely, but if the lack of punctiliousness of Romans in matters of hygiene is not to your taste, you may find a discussion of the latest neuroimaging techniques and their application to matters of behavioral response more to your liking. After the first chapter one immediately perceives that The Science of Kissing is not a tight and narrowly argued case for a positive hypothesis. Rather, it is more synoptic. Of broad scope, and yet rather tentative in its conclusions. The author makes clear in The Science of Kissing that this stance of humility of what we know is the position which is warranted by the science as it is now:

the science of kissing is immature at best.