Just like babies, mouse pups calm down when carried around. 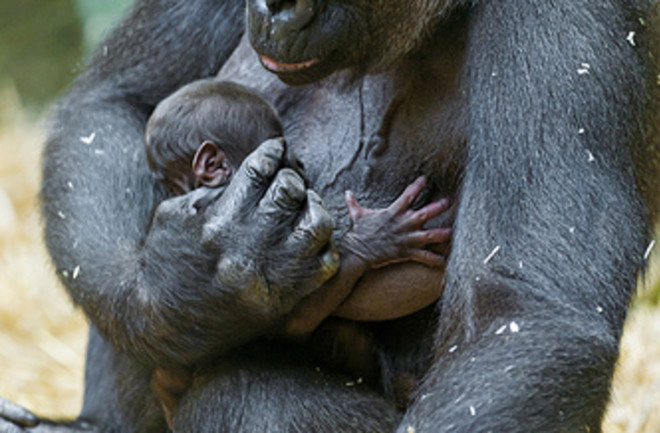 Photo: flickr/Tambako the JaguarIt's probably a good thing that babies scream, or else they might never get fed. But carrying a screaming, kicking infant can make it difficult to outrun the lion that's chasing you. So, it makes sense that animal babies have evolved to calm down when being carried. But just because it makes sense, doesn't make it true! How does one test this? Well, if human babies have evolved to be calm when carried, you would expect other mammals' babies would also calm down when carried. These scientists looked to see whether mice display these behaviors.Infant Calming Responses during Maternal Carrying in Humans and Mice. "BACKGROUND: Mother-infant bonding is the earliest and most critical social relationship of mammalian infants. To promote this bond, infants have innate behaviors to seek maternal proximity and protest upon separation via communication with the mother vocally and through body movement. However, the physiological mechanisms regulating these infant behaviors remain largely undefined. RESULTS: Here we show a novel set of infant cooperative responses during maternal carrying. Infants under 6 months of age carried by a walking mother immediately stopped voluntary movement and crying and exhibited a rapid heart rate decrease, compared with holding by a sitting mother. Furthermore, we identified strikingly similar responses in mouse pups as defined by immobility and diminished ultrasonic vocalizations and heart rate. Using pharmacologic and genetic interventions in mouse pups, we identified the upstream and downstream neural systems regulating the calming response. Somatosensory and proprioceptive input signaling are required for induction, and parasympathetic and cerebellar functions mediate cardiac and motor output, respectively. The loss of the calming response hindered maternal rescue of the pups, suggesting a functional significance for the identified calming response. CONCLUSIONS: Our study has demonstrated for the first time that the infant calming response to maternal carrying is a coordinated set of central, motor, and cardiac regulations and is a conserved component of mammalian mother-infant interactions. Our findings provide evidence for and have the potential to impact current parenting theory and practice, since unsoothable crying is the major risk factor for child abuse."

Related content: Discoblog: NCBI ROFL: If a baby can do statistics, you have no excuse.