The Pump Handle, an online "water cooler for the public health crowd", have been publishing a series of articles on Public Health Classics, "exploring some of the classic studies and reports that have shaped the field of public health." From lead poisoning to the Surgeon General’s 1964 report on the implications of cigarette smoking, the series makes for engrossing material about how our health and standards of living have radically changed due to pivotal research and medical findings. 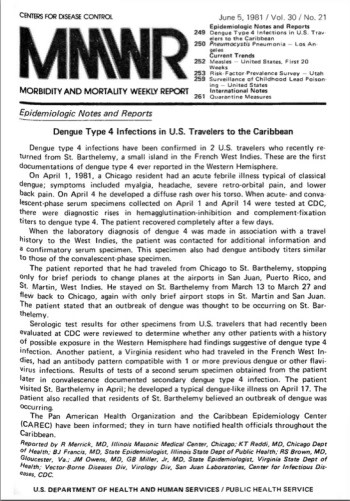 The front page of the MMWR's June 5, 1981 report that included the first report on what would later be discovered to be AIDS.

I'm very grateful that the ladies that blog at The Pump Handle, Liz Borkowski and Celeste Monforton, have given me an opportunity to submit my own interpretation of a Public Health Classic. I focused on a succinct report published in 1981 in the CDC's Morbidity and Mortality Weekly Report (MMWR) reporting a very unusual outbreak of Pneumocystic pneumonia in Los Angeles among young gay men, which the public health world would later discover to be the first ever published report on the HIV/AIDS epidemic. This fungal pneumonia is now known as a common opportunistic infection in people with HIV/AIDS but at the time it was rare infection among many other odd fungal and viral infections, blood cancers and strange symptomatology afflicting scores of gay men across the country and physicians were baffled as to the underlying culprit. As Liz wrote in an email in our back and forth correspondence, "it's so chilling to think back to 1981 and how these physicians had no idea they were witnessing the start of [a] horrific global pandemic."

As I write in the article,

"In just a decade, AIDS would be the second leading cause of death in young men 25 to 44 years in the United States and would have infected over 8 to 11 million people worldwide. The most recent estimate for the number of people worldwide living with HIV/AIDS is 34 million in 2011, with 68% residing in sub-Saharan Africa. That year, there were 2.5 million new HIV infections and 1.7 million AIDS-related deaths ... The June 5th report is a symbol of a time before HIV/AIDS became ubiquitous, before it became a pandemic, before a small globular virus became mankind’s biggest global public health crisis."

Check out my article "Public Health Classics: The First Report of AIDS" at The Pump Handle and see the original 1981 report here.