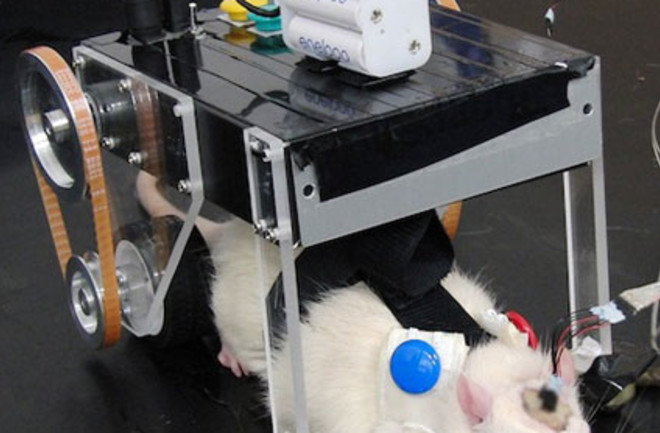 While this contraption looks similar to a doggy wheelchair or a pair of prosthetic legs for your favorite pet, it's actually much more sophisticated. This rat is hooked up to a prototype of a thought-guided robot wheelchair. The robot-rat setup, known as Ratcar, is guided by transmissions from the rat through mini-electrodes implanted in its brain. The animal-robot hybrid was developed by researchers at the University of Tokyo, who explained its purpose to IEEE Spectrum:

"We wanted to develop a brain-machine interface system aiming for future wheelchairs that paralyzed patients can control only with thought," says Osamu Fukayama of the university's Medical Engineering and Life Science Laboratory. "RatCar is a simplified prototype to develop better electrodes, devices, and algorithms for those systems."

The researchers first implanted electrodes in the motor cortex of each rat's brain, and then trained it to tow the contraption around while the motor was turned off. Next the rat was suspended beneath the car so that it could only lightly touch the ground, and couldn't actually move the robo-car with its limbs. Then the car was switched to brain-reading mode and researchers watched to see if the rat could control the car's movements with only the pulses from its motor cortex. The researchers said that six out of the eight rats tested in this fashion were able to adjust well to the mind-controlled car, though they aren't sure how much of the movement was due to the rat's specific intentions, Fukayama explained to IEEE Spectrum

Since the rat would be forcibly moved along with the car, measuring its real intentions became a challenging problem. Another difficulty was that only a small percentage of the electrodes actually recorded neural activity, and the recorded neurons didn't necessarily correlate with target movements.

Improvements to the technology and science of brain reading could lead to more thought-controlled contraptions, including wheelchairs and limbs, which would be useful for people who have lost limbs, are paralyzed, or are suffering from locked-in syndrome. Related content: Discoblog: Attention Poachers: That Deer Just Might Be a Robot

Science Not Fiction: A Robot That Tries To Rock You Asleep

Science Not Fiction: Mind Controlled Wheelchairs, They're for Reals