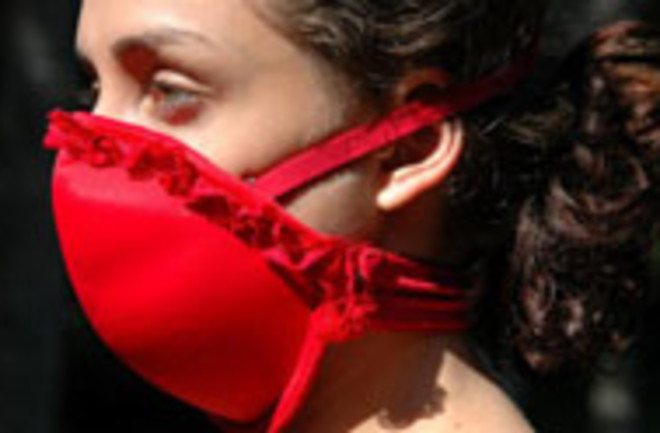 The Emergency Bra, which won both the Ig Nobel prize in public health and a spot on TIME's list of the Worst Inventions of 2009 is now available through the website, www.ebbra.com for $29.99. CNET explains its intended use:

The bra is, of course, meant to be taken off, something most adults presumably have experience with. Once removed, it separates into two masks which, when placed over the nose and mouth, filter out particles....

While the emergency bra has both fans and haters, it didn't take much effort to change an everyday undergarment into an emergency survival tool. While there is additional filtration (let's just call it padding) built into the bra, the main additions are the extra clasps that enable it to divide into two masks, each with their own bands and and an adjustable nose pincher. As the inventor, Elena Bodnar, notes in her IgNobel acceptance speech

It takes only 25 seconds for the average woman to use this personal protective device. Five seconds to remove, convert and apply your own mask, and then 20 seconds to wonder who the lucky man is she is going to save.

Bodnar was inspired by what she saw during the Chernobyl meltdown and as an observer of the September 11th attacks, where readily available dust masks would have helped survivors breathe easier and avoided respiratory illness in their aftermath, explains FOXnews.com

Bodnar, a Ukraine native who now lives in Chicago, started her medical career studying the effects of the 1986 Chernobyl nuclear plant disaster. If people had had cheap, readily available gas masks in the first hours after the disaster, she said, they may have avoided breathing in Iodine-131, which causes radiation sickness.

notes that there is a possibility for men's undergarments to get in on the life-saving action also:

There is also some noise of a "counterpart device for men" in the works, though the precise shape it will take has yet to be revealed. The emergency bra may work well for women, but attaining the second of the two resulting masks does require men who are not cross-dressing to beg and plead in the event of a disaster.

Related content: Discoblog: Afraid of Losing a Lady Friend? Give Her GPS Lingerie

Discover Magazine: The Physics of Bras