Is Your Shower Curtain Toxic? 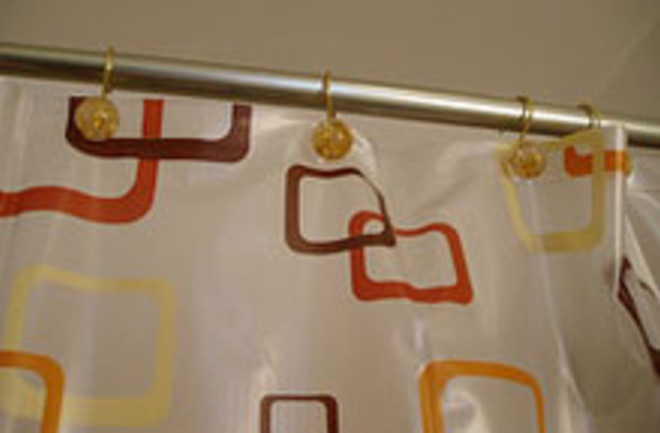 It's an odor familiar to anyone who has ever outfitted a home on a budget: "new shower curtain smell." But the aroma that wafts from a newly purchased vinyl shower curtain is actually a sign that potentially dangerous volatile organic chemicals are being released into the air. In a new report, an environmental group is sounding an alarm about the possible health effects of those chemicals. Researchers from the Center for Health, Environment & Justice say that pliable plastic shower curtains made of polyvinyl chloride (PVC) release up to 108 chemicals in their first month, and that some of those chemicals

are linked to developmental problems, damage to the liver and central nervous system, respiratory harm and reproductive damage [Seattle Post-Intelligencer].

The Environmental Protection Agency tested vinyl shower curtains several years ago, and cataloged many of the same chemicals that are listed in the new report.

Seven of these chemicals -- toluene, ethylbenzene, phenol, methyl isobutyl ketone, xylene, acetophenone and cumene -- have been identified by the Environmental Protection Agency as hazardous air pollutants, said Stephen Lester, the center's science director and a coauthor of the report [Los Angeles Times].

However, there's no consensus on how much of these toxic chemicals is released by the curtains, and whether the amounts are enough to pose a significant heath risk. Regardless of these unknowns, many retailers have taken preemptive measures to avoid criticism. IKEA phased out PVC shower curtains 11 years ago, switching to ethylene vinyl acetate. Target, the country’s fifth-largest retailer, has also committed to replacing many of its shower curtains with EVA. The company has said that 88 percent of its shower curtains would be PVC free by spring of 2008. Bed Bath and Beyond, JCPenney, and Macy’s are shifting toward PVC-free shower curtains, according to the report, but have not set goals or a time frame for completely eliminating the products

The new report is just the latest expression of concern over the safety of the plastics that are so ubiquitous in our everyday lives. In April, Canada declared that bisphenol-a, a chemical found in plastic bottles, was toxic, and the U.S. Food and Drug Agency agreed to review the chemical. For more on what we know and don't know about the dangers of plastics, check out DISCOVER's recent investigation, "The Dirty Truth About Plastic."

More From Discover
Mind
The Two Sides of Envy at Work
Health
How the 'First 1,000 Days' Could Shape Your Baby's Future
Health
What Are COVID-19 Variants and How Can You Stay Safe As They Spread? A Doctor Answers 5 Questions
Health
When Summertime Is a SAD Time
Health
Britney Spears and the History of Controlling Women via 'Insanity' Claims
Health
Are Fake Meat Products Good for You?
Recommendations From Our Store
My Science ShopDiscover STEM Kits
My Science ShopDiscover 2022 Calendar
My Science ShopStrange Science
My Science ShopElements Flashcards
Shop Now
Stay Curious
Join
Our List