Is the HPV Vaccine Already Protecting People Who Haven't Gotten the Shots? 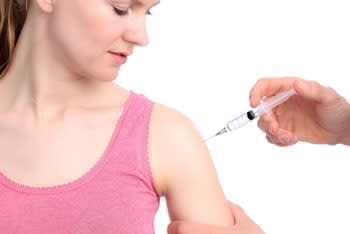 One of the handy things about vaccines is that once a sufficient proportion of the population has been vaccinated, even people who haven't been have lower rates of whatever disease the vaccine protects against. That's because the virus, now facing a housing shortage of sorts, cannot spread as widely. Think of it this way: if you are not vaccinated against it, you might catch the flu from a person on the subway and then pass it on to your roommate. But if you are vaccinated against it, the virus can't spread to you and from you to your roommate. Even if she is not vaccinated, your roommate is protected from catching the flu (at least from you). The phenomenon is called herd immunity

. Now, researchers are reporting that the HPV vaccine, which protects people from a strain of human papilloma virus that causes cervical cancer, may already be helping lower the rate of infection even in people who aren't vaccinated

. The study looked at rates of HPV infection in teens and young women at two primary care clinics before the vaccine went on the market and several years afterwards, and found that infections from the cancer-causing HPV strain were down, from more than 30% to around 13%. What was interesting was that the drop wasn't just due to vaccinated women not having the disease; even when the researchers just looked at women who hadn't been vaccinated, their rates were down to 15%. The vaccine is only 6 years old, and herd immunity usually takes a while to build up, so seeing an effect this early is a bit surprising. And the study is not very large (about 400 in each group), so more research will be required to confirm the effect. But if it is confirmed, it will be pretty exciting that a disease can be knocked down so quickly, even with just a portion of the population vaccinated.