Is Playing College Football Enough to Damage a Brain for Life? 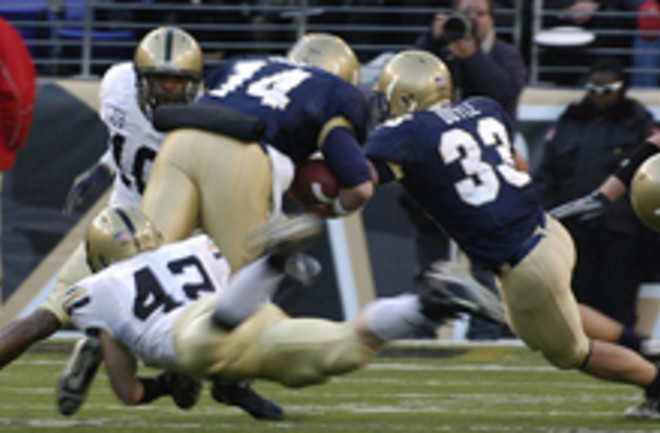 Scientists who have been investigating the link between professional football and severe brain damage have a troubling new piece of evidence: The brain of a deceased man who stopped playing football after college also showed the distinctive signs of damage.

The man, the former Western Illinois wide receiver Mike Borich, died at 42 of a drug overdose in February after a downward spiral of depression and substance abuse that is generally associated with the type of tissue damage found in his brain [The New York Times].

The findings suggest that the damage isn't only associated with professional football players who have played at the highest level of competition for years, but might be a fundamental byproduct of the sport itself. The cumulative effect of the many blows to the head that many football players experience may simply be too much for the brain to handle, researchers say. Several neuroscientists have been investigating football players with a condition called chronic traumatic encephalopathy (C.T.E.). Scientific progress is slow because the condition can only be diagnosed after death, when the brains donated by players can be sliced, stained, and examined for protein deposits and fibrous tangles. So far, researchers have identified C.T.E. in eight NFL players who died between the ages of 36 and 52--many of whom had extreme emotional problems in their last years.

It has been found in every player of those ages examined by the two groups doing such research [The New York Times].

Says Ann McKee, one of the researchers:

“I’ve looked at more than 1,000 brains, and I’ve never seen this in any individual living a normal life — it’s only through head trauma.... These changes are devastating — they’re extreme and they’re throughout the brain,” McKee said. “They’re in the cortex where we think and make judgments, where we do most of the thought that make us humans” [The New York Times].

Concussion specialist Robert Cantu says C.T.E. isn't associated only with full-on concussions, the kind that knock football players unconscious and send them out of the game.

People with C.T.E., Cantu says, “aren’t necessarily people with a high, recognized concussion history. But they are individuals who collided heads on every play—repetitively doing this, year after year, under levels that were tolerable for them to continue to play” [The New Yorker].

Cantu says that linemen are particularly vulnerable to the condition, since they can get hit in the head 1,000 times in a typical football season. While McKee says she won't be able to come to any firm conclusions until she has seen at least 50 football players' brains with C.T.E., the evidence is mounting. However, neither the NFL nor anyone else has come forward with suggestions on what to do about the problem. Related Content: 80beats: Emerging Pattern Shows Football Can Cause Devastating Brain Damage DISCOVER: Lights Out asks whether contact sports can lower intelligence DISCOVER: Soccer Brains