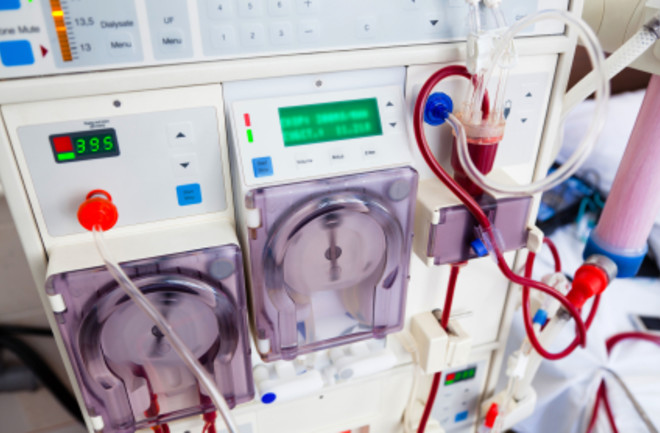 Dialysis can be a life-saver for people with kidney failure, but according to a major investigation, the way we do it and finance it in this country is a total mess. Writing in The Atlantic, reporter Robin Fields of the nonprofit investigate journalism group ProPublica lays out her long investigation into dialysis. Though the procedure since 1972 has been the only one guaranteed universal coverage to all Americans through Medicare, Fields finds it disturbingly inefficient, with one in four American patient dying within a year of beginning treatment:

Now, almost four decades later, a program once envisioned as a model for a national health-care system has evolved into a hulking monster. Taxpayers spend more than $20 billion a year to care for those on dialysis—about $77,000 per patient, more, by some accounts, than any other nation. Yet the United States continues to have one of the industrialized world’s highest mortality rates for dialysis care. Even taking into account differences in patient characteristics, studies suggest that if our system performed as well as Italy’s, or France’s, or Japan’s, thousands fewer kidney patients would die each year. [The Atlantic]

How did things go so awry? Medicare mandated coverage, the investigation finds, but it did not properly mandate how the clinics spent Medicare's money.

The article shows the complexity of providing universal care through for-profit businesses, illustrating how perverse incentives in payment policies create a situation in which patient care is measured in quantity rather than quality. Dialysis patients get too many drugs (which nets profits for the clinics that are dispensing them), for instance, but not enough oversight of dialysis procedures by doctors and nurses (which costs companies money). [TIME]

is available for free at The Atlantic's website. ProPublica obtained data

from the Medicare database that Medicare officials had been holding despite Freedom of Information Act requests, which the ProPublica promised to release shortly. The investigators also turned up a leaked PR document

from Kidney Care Partners, an organization of clinics, detailing how it planned to spin the investigation's findings. The response has already begun in some corners. Barry Straube

, Medicare's chief medical officer, admits that Medicare has not been up to par in inspecting dialysis clinics. But he contends that the violations of cleanliness and of proper practice that ProPublica found in clinic visits are not indicative of the nation's clinics as a whole. He says:

"My main quibble with the article is that it sounds like one would not want to have dialysis in the United States. This is a lifesaving treatment that the vast majority of people are being treated very well in very clean facilities that hopefully make very few mistakes." [NPR]

, the largest dialysis provider in the United States, has also responded through its chief medical officer, Allen Nissenson.

The U.S. has comparatively higher death rates, Nissenson said, for two reasons: Patients tend to come into the dialysis system already sicker than those in other countries, and the U.S. has higher proportions of blacks and Latinos — populations with a greater incidence of serious kidney disease — than more homogenous countries. [Denver Post]

DISCOVER: Effective Kidney Transplants Without a Lifetime of Powerful Drugs

More From Discover
Health
What is Epilepsy and What Should We Know About it?
Health
A Blood Test That Screens For Multiple Cancers At Once Promises To Boost Early Detection
Health
Decorate For the Holidays Early and it Might Improve Your Mood
Health
Feeling Sleepy After a Thanksgiving Meal? It Might Not Be the Turkey
Health
How These Top 10 Favorite Thanksgiving Dishes Impact Your Health
Health
There's a New Group of Blood Types — Here's Why it’s Important
Recommendations From Our Store
My Science ShopDiscover STEM Kits
My Science ShopDiscover 2022 Calendar
My Science ShopStrange Science
My Science ShopElements Flashcards
Shop Now
Stay Curious
Join
Our List