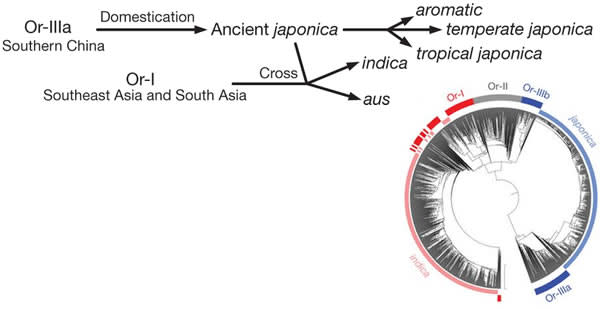 Rice is a pretty big deal. There's really no need to justify research on this crop. It feeds literally billions, so the funding will always flow. Would that we knew rice as well as we know C. elgans. After yesterday's travesty of a paper on barley I thought that readers might find a new paper in Nature, A map of rice genome variation reveals the origin of cultivated rice, more interesting and illuminating. The authors used genomic sequencing, of varied coverage (i.e., very deep, repeated, and therefore accurate coverage vs. a single pass which is a very rough draft), to assess the relationship between Asian wild rice and two of the dominant domestic cultivars, indica (long-grain paddy rice) and japonica (short-grain dry cultivation rice). Presumably the two cultivars derive from a wild ancestor, but the details are still being hashed out. Above I've summarized I think a good portion of the phylogenetic component of the paper, which attempts to resolve confusion in this area for rice. Basically the wild rice lineages are structured, and the two domestic cultivars seem to derive from different ancestral populations (indica from Or-I and japonica from Or-IIIa). Note the rapid diversification of japonica and to a lesser extent indica clades. No surprise that genetic diversity increases from japonica to the wild varieties, with indica in between. But, there has also been hybridization between indica and japonica. This is important, because signals of admixture and introgression have resulted in wildly different implications about the origins of domestic cultivars, at least from my cursory reading of this literature. There have long been lines of evidence that the similarities between indica and japonica are due to selection operating upon "domestication genes." In other words, on characteristics relevant for humans these two cultivars were reshaped from their ancestral states, and pushed along a parallel path toward convergence. Not only that, but they exchanged genes exactly on the loci which are implicated in traits associated with domestic rice. 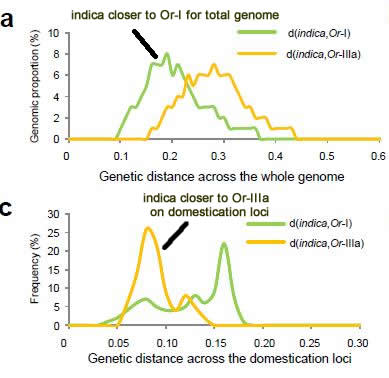 This adaptation of figure 22 in the supplements really shows us what's going on. In terms of total genome content indica is genetically closer to Or-I of the wild rice lineages. This is what you would expect based on the tree which represents genetic distances. But look at the genetic distance distribution for genes which are associated with domestication traits:

indica is actually closer to Or-IIIa, the ancestral lineage of japonica

. The way to resolve is the model presented above. The two domestic rice cultivars come from different tips of the phylogeny of wild rice. But once domestication ensued specific variants began to sweep across lineages, as a function of their selective value. Dr. Brian Moore asserts that nothing in evolution makes sense except in the light of phylogeny (you can rephrase Dobzhansky however you want; e.g., nothing in evolution makes sense except in the light of population genetics). And these results from rice certainly illustrate the power of phylogeny. But they also show us that we need to not get locked into the all-powerful grip of one phylogenetic tree to bind them all. Much of the genome of domestic rice cultivars is well defined by the phylogenetic tree above. But, a subset of the genome of particular importance, and evolutionary relevance, is not. This does not mean phylogenetics is not useful; we wouldn't be able to test for domestication genes sweeping through populations via introgression without the explict tree model in mind. It simply means that when considering evolutionary process we need to strike a balance between the contingent straightjacket which descent along a tree imposes, and the power of hybridization to breakdown those barriers and almost deterministically sweep across the tips of the phylogeny and alter phenotypic characters through adaptation on the genomic level.