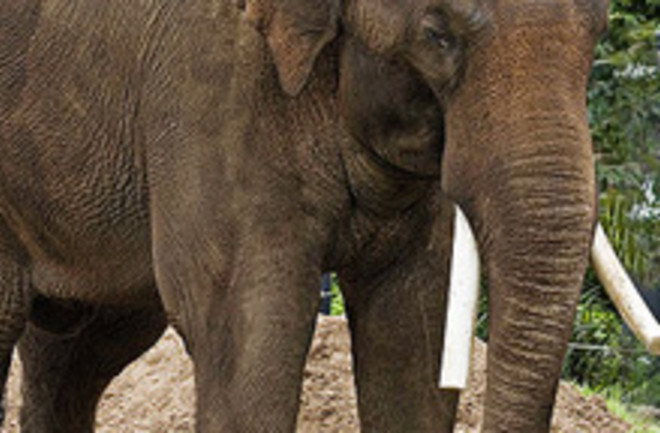 In late November, Indian dentists set to work filling the largest cavity they have ever seen. Their patient, Devidasan the elephant, had a 20-inch-long crack in his tusk that had caused him pain for over five years, kept him from participating in festivals, and posed an infection risk. Dentist CV Pradeep performed the unprecedented operation, which took two and a half hours to complete. The dentistry team used 47 times the amount of resin they would have used to fill a human tooth, and they modified their tools for use on the elephant's tusk, Pradeep explained to BBC News:

"It was literally an elephantine task, because we had to find specialist equipment and modify it," Dr Pradeep said. "The main difference between this and a similar operation carried out on humans is that we were not able to use X-ray screening, because none of our mobile X-ray units was large enough to suit the elephant's needs."

Devidasan was kept awake during the procedure, but the dentists report that he was fully cooperative. The dentists used the same procedure they would have for a cracked human tooth--just on a much larger scale. Pradeep told BBC News

that Devidasan looked much happier after they were done with the filling. He is now fully healed and is back to participating in Hindu festivals. This was the first elephant tusk-filling of its kind, so the dentists aren't sure how long it will hold. They estimate it will stick for at least a few years, depending on how quickly the tusk grows. Related Content: Discoblog: That Elephant Can Smell You From a Mile Away

Discoblog: Could DNA Tell Us Where Smugglers Get Their Ivory?