A week ago I pointed to a controversy about the rate of growth of human cranial capacities over the past few million years. I asserted that the rate of growth was gradual, with no major discontinuity. Over at Genetic Inference Luke Jostins' has done a more formal analysis. 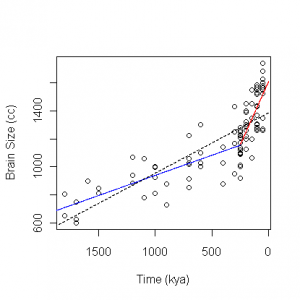 The model shows a definite speed-up of brain size increase recently, and fits the data significantly better than a simple trend line (F(1,90) = 15.8, p < 10^-5). I estimate that the speed-up occured 252kya, and can say with 95% confidence that it lies between 203 and 377 kya. This result is pretty robust to exactly what model we use; I also tried using a model where brain size grew exponentially with time, and this gave a similar break-point: 250kya, with a 95% interval of 167-402 kya (see this graph).

Read the whole thing. I personally don't find an increased rate of encephalization 200-300 years ago that implausible; the emergence of behavioral modernity about 50 thousand years ago resulted in much more rapid cultural evolution than before. But perhaps John Hawks could add some context here. It may be that Neandertals are oversampled in this dataset within the last few hundred thousand years vis-a-vis other archaic H. sapiens, distorting the trend line somehow. To me it still seems that the secular trend of increase over such a long period is somewhat puzzling, especially in light of relative stasis in toolkits. It makes me almost wonder if modern humans in their present highly cultural form were almost inevitable barring extinction due to some deep evolutionary positive feedback loop which was set in motion ~2 million years ago with the emergence of the hominin lineage.