In the Name of Science, College Student Doesn't Wash Jeans for 15 Months 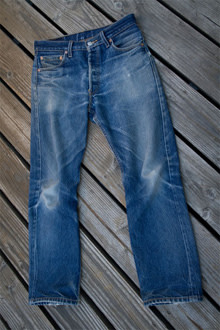 Most people see filthy jeans as a sign of laundry time; others see them as a science experiment. In a someone scary example of DIY science, one student at the University of Alberta found that unwashed jeans worn for 15 months contain the same amount of bacteria as unwashed jeans worn for 13 days. While the science isn't the most rigorous, we applaud the student's commitment to experimentation. Starting in September 2009, Josh Le began wearing a pair of untreated denim pants, eventually wearing them 330 times by December 2010--in other words, over 15 months of unwashed, filthy freedom. And like anyone who wears a specific article of clothing for days on end, Le got fairly attached. As ABC News reports:

"One time I was eating grapefruit, I'd finished the meaty part and was drinking juice and spilled it on my jeans, my heart stopped for a second," Le said.... He got the stain out and said it didn't leave an odor.

Whenever he did detect any odor, Le would just let the jeans air out for a bit or give them a chill in the freezer. After 15 months, Le and Rachel McQueen, an assistant professor at the University of Alberta and a textile scientist, tested the jeans for bacteria and then finally--finally!--chucked them in the washing machine. Le then wore the jeans for 13 more days before the pair re-swabbed the jeans. The results may surprise you. As ABC News reports:

"There did not appear to be differences in the bacterial carriage depending on whether the jeans had been worn for 15 months or only 13 days," McQueen's findings read.... The bacteria present on the jeans came mostly from Le's skin and was not harmful, McQueen said.

http://www.youtube.com/watch?v=gg8acKHCeNI&hd=1 These do-it-yourself scientists caution that, given the small sample size, their findings are a bit shaky. But they do argue that less washing conserves water, helps the environment, and increases the lifespan of your denims. Sounds like The Donnas may have been unnecessarily harsh on the fellow they sing about in Dirty Denim. Related Content: Discoblog: The Washing Machine That Can Measure Your Sweat Stains DISCOVER: The Sexual Frustration of Rats in Polyester Pants DISCOVER: Scientists Caught With Their Pants Down Science Not Fiction: Dirty, Dirty Spaceships