In a First, Scientists Edit Human Embryos In a US Lab

Researchers used CRISPR to prevent an embryo from inheriting a fatal heart condition. 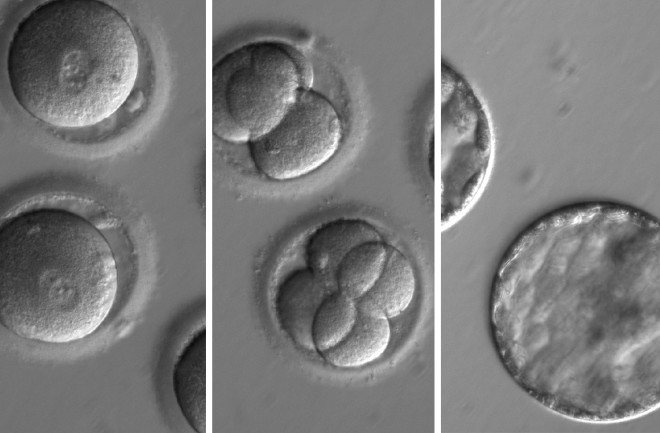 This image sequence shows embryos developing after injected CRISPR along with sperm from a man with a potentially fatal genetic mutation. The embryo developed for several days and was found to be free from the hereditary mutation. (Credit: OHSU)

Earth is now one step closer to a future with genetically modified humans. On Wednesday, scientists working at a lab in Oregon announced they’ve successfully used the gene-editing technique CRISPR to modify viable human embryos.

Researchers in China have already edited human embryos several times using CRISPR in recent years. But this is the first such effort in the United States. And their research was far more successful at knocking out the mutant gene. The team has shown it’s possible to remove a disease-causing gene from an embryo, preventing a child from inheriting an ailment that plagued their ancestors.

“This embryo gene correction method — if proven safe — can potentially be used to prevent transmission of genetic disease to future generations,” says study co-author Paula Amato, a researcher and OB/GYN at Oregon Health and Science University in Portland.

In this study, which was published in the journal Nature, the group prevented an embryo from inheriting a potentially fatal heart condition. But scientists say this same method could be used for knocking out genes that can cause everything from cystic fibrosis to breast cancer.

Their next step is prove the technology is safe enough to begin clinical trials. That would mean implanting the gene-edited embryo into a woman, and studying the genetically engineered child. If U.S. regulators — the Food and Drug Administration — weren’t willing to let that happen, the scientists say they’d pursue clinical trials abroad, perhaps in the United Kingdom or elsewhere.

“We would be supportive of moving this technology to different countries because these mutations are pretty common in the human population,” says Shoukhrat Mitalipov of OHSU, who led the international team. The pioneering scientist is no stranger to controversy, having already created the first three-parent baby and the first cloned human embryonic stem cells.

This latest breakthrough is due to a new technology called CRISPR. The gene-editing tool has made altering life’s code faster and cheaper than ever before. It hacks the very system that bacteria use to spot and cut out invading viruses. And scientists can use CRISPR to simply remove a gene, or even to replace one gene with another. In this case, their target was a mutant gene called MYBPC3 that affects one in every 500 people.

“This genetic mutation is one of the most common causes of cardiomyopathy,” Amato says. The condition causes deadly heart attacks in otherwise healthy young people. And inheriting just one copy of the gene is enough to get the disease. It’s what scientists call a heterozygous mutation.

The study used sperm from a man with this mutant MYBPC gene and a family history of cardiomyopathy. His condition is serious enough that he takes prescription heart drugs and has a defibrillator implanted under his skin and connected to his heart. Then they used the man’s sperm to fertilize eggs from 12 female donors — injecting CRISPR at the same time. CRISPR cut out the MYBPC gene and replaced it with a healthy gene from the mother. Once the embryos were five days old, the team stopped their growth and checked to see how well their approach had wiped out the mutant gene.

They were about 72 percent efficient in knocking out the mutation. But the scientists say they’re confident they can push that number much higher. Finally, the researchers sequenced the embryo’s genome looking for what’s called “off target effects.” This happens when CRISPR’s genetic scissors make cuts to the genome in places the scientists weren’t aiming for. It’s a common concern when using CRISPR. Reassuringly, they didn’t find any.

But the scientists say that doesn’t necessarily mean CRISPR will be as successful once scientists try to remove other diseases. Yet their findings still give hope for stopping hereditary diseases from passing from generation to generation. “This technology can theoretically be applied to any other heterozygous mutation,” Amato says.

That includes mutations like BRCA, a common cause of breast cancer, as well as cystic fibrosis and many more. According to the study authors, this method could potentially prevent tens of thousands of mutations that affect millions of people around the world.

Mitalipov says in this initial study they used a fairly standard CRISPR approach and watched to see how well the embryos would repair the breaks. It worked surprisingly well, however, he thinks there are additional tools they could use to get even better results. “Then I would say we would be able to proceed to clinical trials,” Mitalipov says.

Their initial focus will likely be on the heart condition-causing gene that they’ve already found success with, but there are other genes Mitalipov says he’d like to target, too. “We would like to explore a correction for cancer genes particularly BRCA, which is inherited the same way and a single copy can cause breast cancer,” he says.

Their research doesn't violate any U.S. regulations, but it flirts with the ragged edge of guidelines issued earlier this year. The study was reviewed by an internal board at OHSU, and the team says they were working within the guidelines of the recently released National Academy of Sciences guidelines. But that report suggested such gene editing should only be pursued in cases where there was no “reasonable alternative” treatment. And in this case, there is an alternative. Instead of fixing mutant genes, doctors can simply remove the problematic embryos and only inject the healthy ones during in-vitro fertilization. But the researchers say that method is expensive and difficult on a mother. Using their approach, if it’s proven safe, could mean fewer painful injections and reduce costs.

Some worry this kind of technology could lead to “designer babies,” where parents alter their offspring’s DNA for more than just hereditary diseases. In theory, the technology could lead to parents with the financial means choosing to have kids that are smarter, taller, have fuller heads of hair, etc. That dystopian vision played out in the sci-fi cult classic film Gattaca, where people are judged for being genetically inferior and jobs are denied to those with genetic heart conditions.

That slippery slope to eugenics argument was even used by Kentucky Sen. Rand Paul — a physician — whose speech appeared to come from Wikipedia’s Gattaca entry. “In your lifetime, much of your potential — or lack thereof — can be known simply by swabbing the inside of your cheek,” the senator told a Christian college in 2013. “Are we prepared to select out the imperfect among us?”

That sort of perception could make it tough to get regulatory approval to advance the research, particularly in the United States. “At this point, it’s not clear how the clinical trials would proceed because it would depend on regulatory agencies, and they would have to tell us what is it that they require,” Mitalipov says. “There is still a long road ahead particularly if you want to do it in a really regulated way.” For now, he’s not certain when — or where — they might be able to push forward.