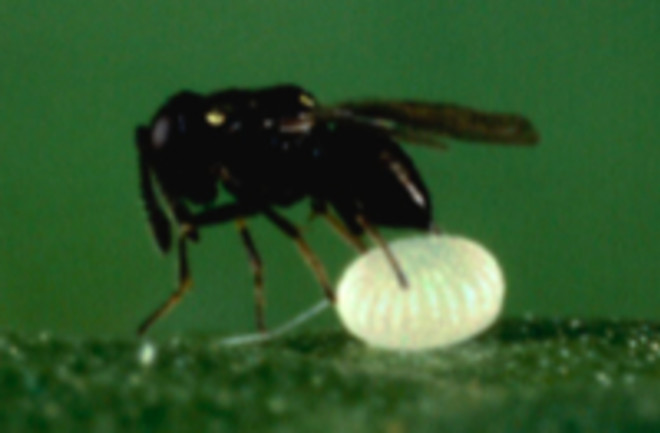 Parasitoid wasps (or rather, one group of them called the Ichneumonidae) are the subject of one of Charles Darwin's most famous quotations: "I cannot persuade myself that a beneficent and omnipotent God would have designedly created the Ichneumonidae with the express intention of their feeding within the living bodies of caterpillars." Scientists have learned a lot more about parasitoid wasps since Darwin wrote about them in 1860, and their elegant viciousness is now even more staggering to behold. Not only do they devour their hosts alive from the inside out, but they also manipulate the behavior of their hosts to serve their own needs (see my post on zombie cockroaches for one particularly startling example). To be fair, though, parasitoid wasps are not just vicious to their hosts. They can be just as nasty to other parasitoid wasps. Some wasp larvae can only mature inside other parasitoids, turning their host into a grotesque Russian doll. And, as I write in tomorrow's New York Times, some wasps turn their caterpillar host into a battlefield, waging all-out war with other wasps. They kill other species of wasps, and will even kill their own siblings by the thousands. (Be sure to see the diagram of the sci-fi life cycle of the wasp Copidosoma floridanum. By the end of it, the caterpillar is a mummified mass of pupae.) These creatures are certainly bizarre, but bizarre in an scientifically interesting way. Scientists have found that the evolutionary forces that shape other animals can also explain these wasps. As I explain in the article, the warfare among the wasps probably arises thanks to the peculiar way they develop. A single egg (like the one being laid inside a host egg in the picture) gives rise to thousands of genetically identical siblings. Up to a quarter of them become vicious soldiers, while the rest become passive feeders. The soldiers are sterile, lacking any sex cells. In a way, they're not even really individuals. In a genetic sense, they're like disembodied organs. Imagine you could send your liver off to kill your enemies. The soldiers benefit their siblings by killing--either killing competitors or even killing other siblings. Evolutionary trade-offs between conflict and cooperation are also at work in the families of other species, from cooperative honeybee hives to cub-killing packs of lions to humans. What would Darwin make of these wasps? I'll leave that for more theologically-minded folks to speculate. [For those interested in all things Web 2.0-ish, I'm pleased to say that this is the first article I've written for the Times that includes a couple links to relevant scientific papers. It's downright bloggy.] [For more fun with parasitoid wasps, you can also check out my book, Parasite Rex.]