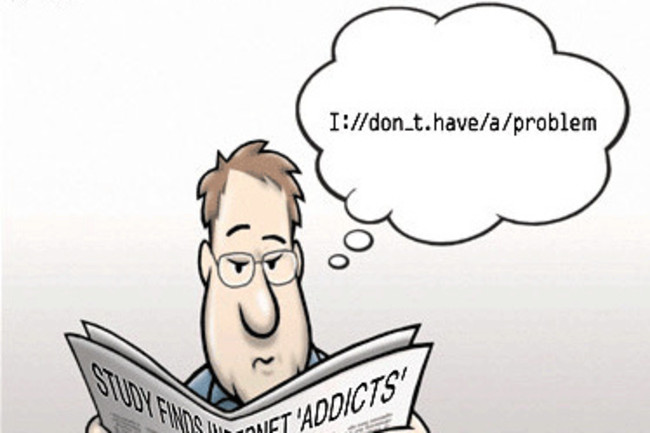 Articles about Internet addictions have been popping up (online) for a while now—along with advertisements for 12-step recovery programs—but the "disease" at first seemed tongue-in-cheek (and, actually, it was). Then, like so many mental illnesses these days, it became over-hyped. The would-be condition didn't even make it into the DSM-IV (Diagnostic and Statistical Manual of Mental Disorders IV)—the Bible of the mental health world—which includes everything from narcissism to 14 types of anxiety disorders. But now Oregon Health Sciences University Psychiatrist Jerald Block wants to make sure Internet addiction gets some recognition. In an editorial in the March edition of the American Journal of Psychiatry, he argues that it should be included in the next edition of the DSM, due out in 2012, and laid out the standards of this deadly (no, really) new affliction. If you meet the following criteria, you too might be addicted to the internet:

There have been some serious incidents with the internet in South Korea, where there is nearly universal internet access. With users "dropping dead from exhaustion after playing online games for days on end" and skipping school to stay online—"shockingly self-destructive behavior in this intensely competitive society"—internet addiction is considered "one of [the country's] most^ serious public health issues." About 2.1 percent of South Korean children are addicted and require treatment (80 percent of these needing medication, and 20–24 percent needing hospitalization), and a number of camps have opened for Internet addicts. In China, which has more Internet users than any other country in the world (despite vigorous censorship that recently went so far as to block YouTube), the Director of Addiction Medicine at^ Beijing Military Region Central Hospital reported that 13.7 percent of^ Chinese teenage Internet users are addicted. Not surprisingly, the phenomenon isn't just confined to Asia. In fact, Block thinks the affliction might be even worse in the U.S., where it's more surreptitious. He states that, "unlike in Asia, where Internet^ cafes are frequently used, in the United States games^ and virtual sex are accessed from the home. Attempts to measure^ the phenomenon are clouded by shame, denial, and minimization." Block also notes that, unlike therapists in the U.S. who have difficulty detecting Internet addiction, "[Asian] therapists are taught to screen for it." The consequences have been pretty dire for several people in China and South Korea, and possibly in the U.S.—but is the Internet really the root of the problem? In his editorial, Block notes that "about^ 86 percent of Internet addiction cases have some other DSM-IV diagnosis^ present. In one study, the average patient had 1.5 other diagnoses." So is placing these people under an additional label going to help? Does the Internet exacerbate the preexisting conditions, or is it just an additional place for self-destructive behaviors to manifest themselves? It seems quite possible that these people are using the internet to cope with other problems, so why does Block not acknowledge this point at all? Well, here's one possibility, tucked into a footnote at the end of the article: "Dr. Block owns a patent on technology that can be used to restrict^ computer access" (although "[Editor-in-Chief] Dr. Freedman has reviewed this editorial and^ found no evidence of influence from this relationship").

Image courtesy of husin.sani via CreativeCommons