If these mice could speak 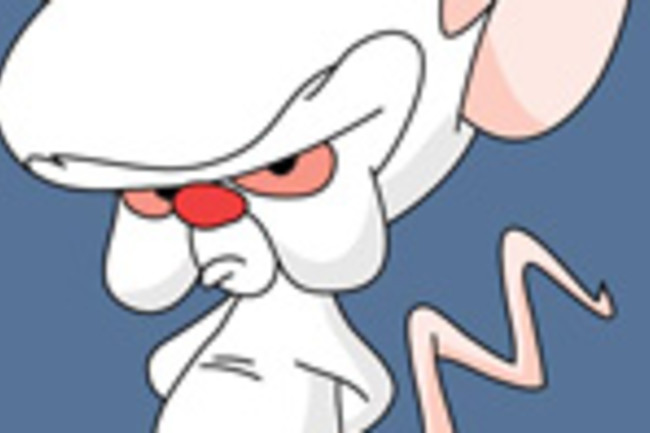 Nick Wade in The New York Times reports on new research where they inserted human FOXP2 genes into the mouse genome. Here are some of the findings:

Despite the mammalian body's dependence on having its two FOXP2 genes work just right, Dr. Enard's team found that the human version of FOXP2 seemed to substitute perfectly for the mouse version in all the mouse's tissues except for the brain. In a region of the brain called the basal ganglia, known in people to be involved in language, the humanized mice grew nerve cells that had a more complex structure and produced less dopamine, a chemical that transmits signals from one neuron to another. Baby mice utter ultrasonic whistles when removed from their mothers. The humanized baby mice, when isolated, made whistles that had a slightly lower pitch, among other differences, Dr. Enard says. Discovering that humanized mice whistle differently may seem a long way from understanding how language evolved. Dr. Enard argues that putting significant human genes into mice is the only feasible way of exploring the essential differences between people and chimps, our closest living relatives.

It isn't a surprise that FOXP2 has a lot of effects. Additionally it probably isn't that surprising that the "language gene" as it is sometimes hyperbolically termed changes the way mice vocalize, it seems to have evolved in songbirds as well as the lineage leading up to humans. Mice are obviously more similar genetically to humans than birds so it shouldn't been that surprising. The original paper is in Cell, A Humanized Version of Foxp2 Affects Cortico-Basal Ganglia Circuits in Mice:

It has been proposed that two amino acid substitutions in the transcription factor FOXP2 have been positively selected during human evolution due to effects on aspects of speech and language. Here, we introduce these substitutions into the endogenous Foxp2 gene of mice. Although these mice are generally healthy, they have qualitatively different ultrasonic vocalizations, decreased exploratory behavior and decreased dopamine concentrations in the brain suggesting that the humanized Foxp2 allele affects basal ganglia. In the striatum, a part of the basal ganglia affected in humans with a speech deficit due to a nonfunctional FOXP2 allele, we find that medium spiny neurons have increased dendrite lengths and increased synaptic plasticity. Since mice carrying one nonfunctional Foxp2 allele show opposite effects, this suggests that alterations in cortico-basal ganglia circuits might have been important for the evolution of speech and language in humans.For a video summary of this article, see thePaperFlickfile available with the online Supplemental Data.

Here's the discussion & the most important figure in relation to vocalization:

The fact that Foxp2^hum influences ultrasonic vocalization of pups in a specific and reproducible way is of obvious interest. However, it is important to note that this influence is subtle and within the range of normal variation among mice. A relevant question is also to what extent mouse vocalization can be compared to human speech. All terrestrial mammals produce their vocalizations by an air stream from the lungs that passes the larynx and generates sounds. In most animals, oscillations of the vocal folds and/or specific structures of the vocal folds generate the sound through oscillations...Ultrasonic vocalizations in rodents are also produced by the larynx...but they are thought to derive from an aerodynamic whistle rather than vibrations of vocal cords...Nevertheless, the basic neurological and muscular systems necessary for vocalizations probably overlap to a large degree in mice and humans...Indeed, some neural circuits important for vocalization are even conserved in fish...Hence, the fact that Foxp2hum influences the structure of isolation calls in the mouse, especially since this effect is not accompanied by physiological effects outside the brain, supports the hypothesis that the two amino acid substitutions that occurred during human evolution affect aspects of speech and/or language. ... The fact that Foxp2hum affects dopamine levels, dendrite morphology, gene expression and synaptic plasticity of medium spiny neurons indicates that it impacts cortico-basal ganglia circuits where medium spiny neurons in the striatum receive contextual information from the cortex and reward signals from dopaminergic neurons and send integrated signals to brain stem structures and the cortex...Several lines of evidence indicate that cortico-basal ganglia circuits could be relevant for speech and language...For example, reduced dopamine release in the striatum is positively correlated with speed and accuracy of phonological processing...activation of a part of the striatum plays a crucial role in lexical-semantic control...and patients with Huntington's disease show - dependent on the striatal subregions affected - impairments in the retrieval of lexical information and the application of combinatorial rules...Furthermore, cortico-basal ganglia circuits and their dopaminergic modulations are crucial for song learning in birds, which is thought to resemble aspects of vocal learning in humans...This is supported by the recent finding that when FoxP2 expression is knocked down in basal ganglia of songbirds, vocal imitation is impaired...Furthermore, individuals heterozygous for a nonfunctional FOXP2 allele show structural effects and functional impairments in the striatum...supporting a role for FOXP2 in cortico-basal ganglia circuits with respect to speech and language. 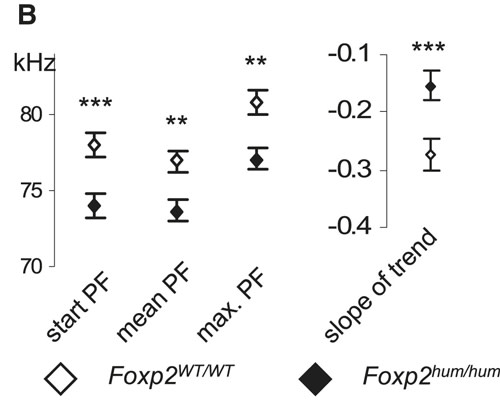 (B) Plots of acoustic parameters differing between genotypes. Measurements are averaged across days and individuals (SEM). The peak frequency (PF) refers to the frequency with the maximum amplitude in each analyzed time window of 0.21ms. Asterisks indicate significant differences between genotypes (: < 0.01; : < 0.001).Update: My choice of terms elided some important nuance, as was brought up in the comments.