I am not a genetic blend of my parents

One of the aspects of genetics which I think tends to reoccur is that people have a fixation on the two extreme ends of visible genetic inheritance. On the one hand you have discrete Mendelian or quasi-Mendelian traits where most of the variation is controlled by only a few genes, and which may exhibit dominance/recessive expression patterns. And you also have the classic quantitative traits which exhibit continuous variation and a normal distribution. Mendelism leads to strange ideas about atavism/throwbacks, and a promiscuous utilization of the idea of dominance/recessivity (e.g., "non-white genes are dominant to white genes"). Continuous traits are more comprehensible in their confusion, as they are the intuitions which led to the models of "blending inheritance" which were in the air before the triumph of Mendelian genetics in the first decade of the 20th century. But they lead to the logical inference that variation should slowly "blend away" through admixture. This was a major problem with 19th century models of evolution through natural selection; blending eliminated the variation which was necessary for the action of selection to be effective. A blending model also explains why there is a common perception that racial admixture will lead to the elimination of variation as "everyone becomes brown." This is not correct, as a trip to South Asia or Brazil would make clear. Because of the discrete nature of genetic inheritance, and the concentration of pigment variation on half a dozen or fewer genes of large effect, there remains a while range of variance among the offspring within mixed-race families. Brown can give rise to white or black. To some extent this is intuitively understood by most people. On many traits you deviate a great deal from the midparent value of both parents. Some of this can be because a trait has an environmental component of variance of outcome. "Environment" here really means all the causes which aren't linearly genetic (it can, for example, include gene-gene interactions in some models). But even for traits like height which are overwhelmingly heritable in developed societies, that is, most of the variation in the population is due to variation in genes, you have an enormous amount of variance between siblings. Why? I assume much of it is due to recombination. Offspring have novel haplotypes. One thing that's really interesting in terms of my own genetics is that I'm way more "Asian" than you'd expect from mid-parent value. I've run a whole lot of ADMIXTURE runs, and it is consistent that my mother has more East Asian ancestry than my father. About 2% more. But the weird thing is that have as much Asian as my mother, or, I often have even more. 23andMe shows me at 40% Asian after I did a v3 upgrade. My mother is at 40%. And My father is 38%. I thought of this issue when Zack Ajmal posted a genome dissimilarity matrix visualization for the HAP participants. I've labeled myself and my parents on the first two dimensions: 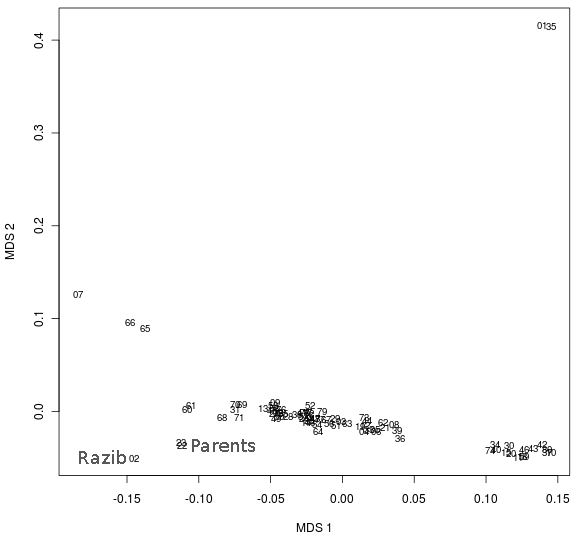 My parents are outliers. But I'm even more of an outlier! In fact, they cluster close to together. You can see the same pattern in MDS 3 by 4, and 5 by 6. Is this just an artifact of the way the MDS is displaying the dissimilarity matrix? I guess I should do the same with the South Asian samples I have, and then check that against all my siblings and see if they are all strange, or scatter around my parents.