Update:Author comments below. PLoS ONE has an interesting paper out, Genetic Ancestry, Social Classification, and Racial Inequalities in Blood Pressure in Southeastern Puerto Rico. They're exploring the topic of African ancestry and hypertension, which seems to have a positive correlation, but where there is dispute as to whether that correlation is driven only by genes, or environment, or a combination. Puerto Rico is characterized by a wide range in admixture between Europeans & Africans (with a minor but significant amount of Amerindian). Additionally, because most variance in between population complexion is controlled by only a half a dozen genes there is going to be a lot of noise in the correlation between skin color and ancestry. In this small sample of 87 individuals, 37 white, 31 brown and 19 black, assayed on 78 ancestrally informative markers, the correlation was 0.63. Moderately strong, but one variable can only explain 40% of the variance on the other (some more juice would no doubt be squeezed by more markers, as well as using a continuous skin color metric based on reflectance). Here's the plots of ancestry across the three classes: 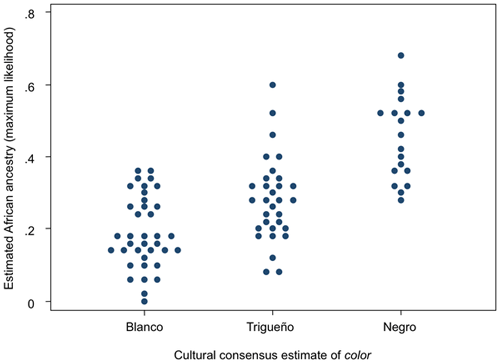 The means & standard deviations in African ancestry for the three classes were 0.19 & 0.10, 0.28 & 0.12 and 0.44 & 0.11. It is interesting that the black category in this community in Puerto Rico may very well be whiter than 90% of American blacks (10% of American blacks are 50% or more white). The top line finding of this paper though is that once you control for the interaction of color with socioeconomic status the effect of African ancestry his sharply mitigated (to below statistical significance). There are some data from Brazil which also provide possible avenues of investigation into the interplay between perceived race coded through phenotype and the underlying ancestral quanta. Here is the regression table which lays out their model (I left one off because of how small the font is already): 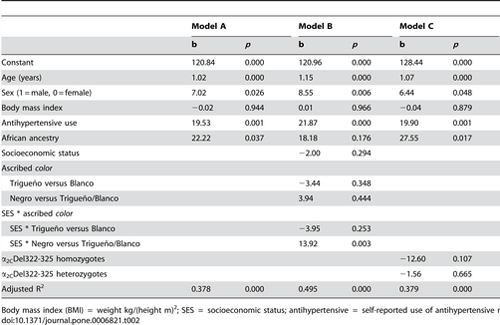 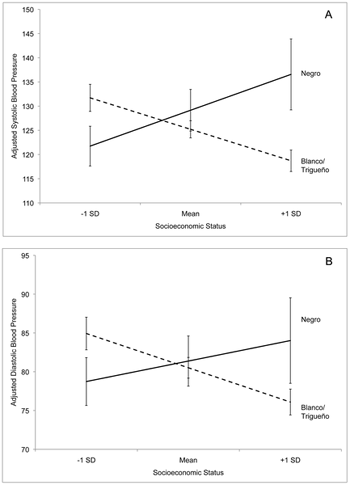 And now here's a chart illustrating the interaction effect evident in the model above. What's going on here? This is showing you the interaction where higher SES among those coded as black seem to have higher blood pressure. They tiptoe around it in the discussion, but the implication is strong here that racism and negative life experience might have had some role to play in this. How this could play out concretely isn't too difficult to imagine. Years ago I read a book which was basically an ethnography of Brazilian culture, and in particular how blacks and whites related as a function of class. One of the illustrations of the travails of the lives of middle class blacks was a mother who told her children never to eat bananas in public, lest they be mocked by their white peers. The experience of racism by lower and middle class blacks was qualitatively different in this model. In particular, lower class blacks were often embedded in a predominantly black community and so could withdraw from interactions with whites, while middle class blacks were professionals who interacted with and lived with whites and so experienced stress and tension as a matter of course. A possible novel finding in this paper was that taking into account the color X SES interaction they found a genetic association with hypertension. Association studies obviously have to account for population genetic substructure. Here they are suggesting that other environmental variables might be useful as well (in a world of infinite research dollars, of course!). Nevertheless, I pointed out the fact that the blacks in this study aren't very black ancestrally to urge some caution (they do so as well). The sample size is small, and lots of variables are being manipulated and values coded (e.g., the racial classes are coarse). Who knows where the p-values might have fallen if the parameters were jiggled in another direction. The studies about people with African ancestry and hypertension include some nations where the overwhelming majority of the population is African ancestry (e.g. ,West Indies), but also there are data from African nations where hypertension isn't a problem. It seems likely that genes and environment are both a role in these sorts of "lifestyle" diseases, and that there are likely interaction effects at work. Finally, instead of the racial angle, I wonder about the familial one. In these societies which are heterogeneous by origin siblings may be coded as different races. Dark-skinned siblings may be treated much worse than light-skinned siblings. It would be interesting to see the effect within families among siblings. These sorts of studies often get boiled down to "racism = bad health" in the American media, but I do suspect it's more complicated than that. Especially when other societies do not always have American conceptions of race. Citation: Gravlee CC, Non AL, Mulligan CJ, 2009 Genetic Ancestry, Social Classification, and Racial Inequalities in Blood Pressure in Southeastern Puerto Rico. PLoS ONE 4(9): e6821. doi:10.1371/journal.pone.0006821 Addendum: I assume someone might quibble with my translation of the terms above as "white," "brown" and "black." So be it.