How Your Tax Dollars Save Lives: Gene Therapy

Sixty years of government-funded basic research has set up a potential revolution in our approach to disease. 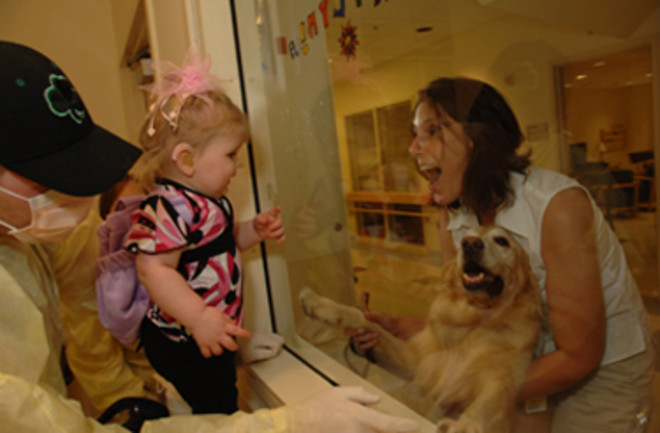 SCID patient Katlyn Demerchant could not leave a sterile room without falling dangerously ill. She received a gene therapy treatment in 2007 that helped alleviate her immune deficiency. | NIH Clinical Center

After years of doubts and dangers, gene therapy is showing promise as one of our best hopes for fighting lethal and debilitating diseases (see the DISCOVER feature "The Second Coming of Gene Therapy"). In the lab, replacing malfunctioning genes with working ones has succeeded in curing or treating animals with hemophilia, (the animal analogs of) depression, and other afflictions. In clinical trials in people, it’s brought sight to the blind, allowed kids without immune systems to live normally, and contributed to one of the most talked-about cancer discoveries of the year, a promising experimental treatment for leukemia.

Of course, the technique was not brought to us from above by Prometheus—it all rests on a mountain of basic science research, most of it publicly funded.

1952: Hershey and Chase show that DNA is the genetic material, bearing heritable traits from generation to generation. Most scientists previously thought the leading contender for that role was proteins, though experiments in 1944 had suggested DNA was more likely. Hershey goes on to win the Nobel Prize.

Funded in part by the NIH.

1966: Marshall Nirnberg and colleagues crack the genetic code [pdf] , a discovery that’s key to our understanding of how exactly DNA relates to heritable traits. The team show that amino acids—the building blocks of proteins, which control our cells’ functions—are each coded for by specific sections of DNA three base pairs long. Nirnberg wins the Nobel Prize in 1968 for this work.

1966:Edward Tatum suggests in a speech that genetic disease might be treated with “genetic engineering.” He suggests that nonpathogenic viruses be used to transfer genes to patients’ cells, as researchers had previously observed that viruses could, at least temporarily, introduce DNA into bacterial and mammalian cells.

In the same year, Joshua Lederberg, who had mentioned the idea of gene therapy as early as 1963, wrote an article for The American Naturalist describing how it might be done, describing it as “virogenic therapy.” First, however, researchers needed a method for isolating the gene they’d like to insert.

1969: Jonathan Beckwith at Harvard and colleagues are the first to purify a gene [pdf], using viruses to selectively snap up the proper gene from a soup of DNA from pureed E. coli. Once researchers learn to isolate genes, though, they still have to figure out how to introduce them into viruses.

Funded in part by the NIH and the NSF.

1972: Paul Berg and collaborators do pioneering work towards using a virus to stably insert genes of the researcher’s choice into a cell’s genome. He is eventually able to make E. coli produce human insulin, a key step towards using cells as tiny drug factories. For this work, he wins the Nobel Prize in 1980.

Funded in part by the US Public Health Services, the parent agency of the NIH.

1982: In the early 80s, scientists realize that retroviruses have tremendous potential to deliver genes stably into large numbers of cells, and start producing lab-safe versions. In one such study by Ronald Evans and colleagues, the gene for rat growth hormone is stably inserted into mouse cells by a retrovirus. Putting this knowledge to use, scientists begin to use viruses to treat cells removed from patients with genetic diseases.

Funded in part by the US Public Health Services.

1990: The first FDA-approved gene therapy trial takes place at the NIH, when two girls with a type of severe combined immunodeficiency syndrome (SCID) caused by an enzyme deficiency are infused with modified versions of their own blood cells that carries genes for the functioning version of the enzyme. The effects are temporary but observable. For the long term, the patients still have to receive enzyme injections to treat their disease.

2002: Further forays in using retroviruses for gene therapy, however, bring tragedy. Two of 10 children treated with gene therapy for SCID in a French trial develop leukemia, researchers announced in 2002, and it is discovered that the virus had inserted genes in several unexpected places around the genome, leading the cells to become cancerous. After this incident, and the death in 1999 of a young man in a clinical trial, apparently because of an immune reaction to the treatment, gene therapy research grounds nearly to a halt.

Despite the pall these events laid over the field, scientists work to find safer ways to practice gene therapy. Lentiviruses, a class of retroviruses, show particular promise because they often did not provoke an immune response, and stringent testing of modified cells for suspicious gene insertions is now a necessary stage of experiments.

2009: A resounding success brings gene therapy back into the limelight: Jean Bennett and Albert Maguire announce that 12 patients with a degenerative disorder leading to total blindness were treated with viruses bearing a replacement gene, and all regain some vision.

Funded in part by the National Center for Research Resources.

2011: Another success makes headlines: David Porter and Carl June report that immune cells modified with gene therapy had cured two terminal leukemia patients of their cancer. Though the treatment is still in the very early stages, its striking results, along with the success of the blindness study two years prior, bring new attention to gene therapy’s potential.

The National Cancer Institute is now funding a study to determine what specific characteristics led to that trial’s success, comparing two sets of modified immune cells in patients. Porter, June, and their collaborators are currently recruiting patients.

Funded in part by the NIH.

This post is part of a blog carnival called Public Science Triumphs, a project that shows the great value of public funding of basic science at a time when Congress is considering deep cuts to agencies like the National Science Foundation and the National Institutes of Health.

Annalee Newitz of io9, the inspiration for the series, writes: “Did you use a browser to zoom around on the internet today? Have you ever been vaccinated? If you answered yes to either of those questions, your life has already been made better through publicly funded science in America. Public science is basic scientific research funded by governments, and just in America alone it's led to breakthroughs in everything from medicine to clean energy. But now public science is under threat. Here's why we can't afford to lose it.”

The budget proposal comes out on November 23rd. If you’d like to learn more about the tremendous successes of publicly funded science and why it should not be cut, check out Maggie Koerth-Baker’s post on space dust or Keith Veronese's post on single-molecule chemistry.