How to Grow a New Lung

One key is getting rid of the donor's pesky cells, leaving the some critical structures behind. 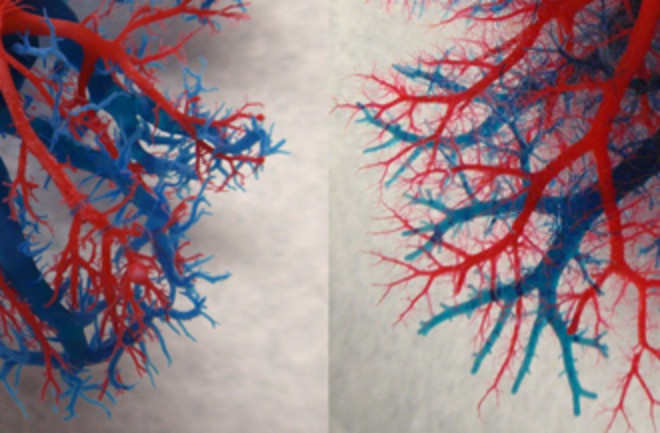 A rat liver whose cells were washed away (left) retains the same blood vessel structure as a normal liver (right). B.E. Uygun and O. B. Usta | NULL

A group of rats in New Haven, Connecticut, have offered living, breathing proof that scientists are learning how to grow replacements for vital organs. Earlier this year, researchers at Yale University removed the animals’ left lungs, swapping them out for new ones crafted in the lab. Although the rats survived no more than two hours, that was long enough to prove that an engineered lung could exchange gas and keep an animal alive. In a separate project, rats at Massachusetts General Hospital received cultivated livers and survived for up to eight hours before the transplant was removed.

The recipe for these replacement organs begins with destruction: Wash away the cells of a donor organ with detergent, leaving behind just its spongy, protein support structure. This remainder can then be seeded with immature organ cells or stem cells from the intended recipient. The new cells grow around the protein scaffold, building a complete organ. Researchers at the University of Minnesota first used this technique in 2008 to build a disembodied rat heart that was able to pump blood while hooked up to a machine.

“Each organ has its own specific set of challenges,” says Laura Niklason, the Yale bioengineer who led the lung project. Human trials for complex organs, such as the liver and heart, are still a long way off; researchers need to devise a reliable way to harvest the required stem cells and perfect the method of packing them into the scaffold. But two years ago, tissue engineers in Europe successfully implanted a lab-grown left bronchus into a woman with severe injuries. Niklason hopes that other simple engineered tissues, such as the blood vessels she has been working on, will be ready for human trials within a year.