How to Cook Steak in Your Beer Cooler 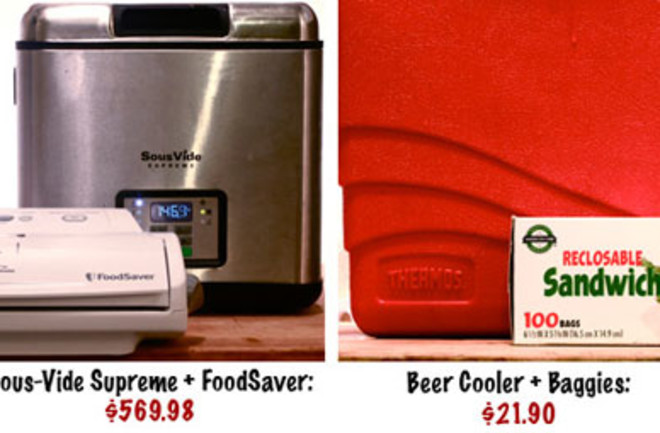 After years of serving as your faithful companion to ball games and keeping the brewskies frosty at backyard barbecues, your trusty beer cooler now has a new assignment--cooking up a gourmet meal, sous-vide style. For those of you who don't keep up with high-tech cookery, sous-vide is a method of cooking where food is heated for an extended period at relatively low temperatures. Unlike a slow cooker or Crock pot, the sous-vide process uses airtight plastic bags placed in hot water well below boiling point (usually around 140 Fahrenheit). The idea is to maintain the integrity and flavor of the food without overcooking it (but while still killing any bacteria that may be present). Normally, a sous-vide cooker like the Sous-Vide Supreme would set you back hundreds of dollars, but chef J. Kenzi Lopez-Alt shows us how to use a beer cooler to cook a perfect piece of meat.

All you have to do is fill up your beer cooler with water a couple of degrees higher than the temperature you'd like to cook your food at (to account for temperature loss when you add cold food to it), seal your food in a simple plastic Ziplock bag, drop it in, and close your cooler until you food is cooked, writes Chef Kenzi on the blog Serious Eats. It's really as simple as that. So how does it work? Chef Kenzi explains that a beer cooler keeps things cool because it has a two-walled plastic chamber with an airspace in between; this airspace acts as an insulator, preventing outside heat from reaching the cold beer inside. Because insulators work both ways, the cooler can be used to keep things hot, too. For his experiment, Chef Kenzi cooked steak at 125 Fahrenheit for one hour and chicken at 140 Fahrenheit for 2.5 hours in both the beer cooler and in the Sous-Vide Supreme. If you looked at the picture below, you really can't tell which steak got the beer cooler treatment. Both pieces look equally done from edge to center, and Chef Kenzi says the beer cooler kept the food hot till served.

And there's yet another benefit. A beer cooler is easily transportable and does not need an electric outlet, writes Chef Kenzi:

That means that the other night, for example, I was able to start cooking a two-pound dry-aged ribeye in my kitchen, carry the whole beer cooler out to my deck two hours later, slap the beef on a blazing hot grill for 30 seconds just to mark them and brown the exterior, then enjoy the most perfectly cooked meat that's ever come off my Weber.