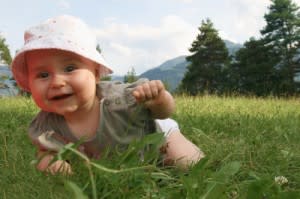 Crawling my way to a healthier immune system.

Bacteria are practically everywhere around us, including on and inside you, but that is in many ways a good thing. For instance, having a diverse set of microbes living on your skin might help prevent allergies. A new study published in PNAS links two factors related to how microbes might affect our health: the observation that diversity of microbes on a person is related to the diversity of microbes in their environment, and the hygiene hypothesis

, which suggests that the modern uptick in allergies and autoimmune diseases is caused by childhood under-exposure to bacteria. For a while now, scientists have known that kids living on farms are less likely to have allergies or asthma

. Being around livestock means the farm kids are also around a more diverse set of bacteria than city kids living in an apartment. In this new study, scientists swabbed the skin bacteria of 118 Finnish kids, some who lived in rural areas and some who lived in urban areas. They also tested the kids for levels of an antibody called IgE, high levels of which indicate hypersensitivity to allergens, or what is known as atopy

. Lastly, they surveyed the parents about plant diversity around their homes. Once the researchers had three pieces of the puzzle---biodiversity in the environment, microbial diversity on the kids' skin, and whether the kids were prone to allergies---they started looking for connections. They found that kids with atopy had less diversity in their skin microbes, specifically in a class of bacteria called gammaproteobacteria. It wasn't the number of gammaproteobacteria cells that mattered (they only make up 2.8% of the bacteria on skin) but the number of different varieties. The kids with atopy also showed a lack of diversity in a specific group of plants, "uncommon native flowering plants." The lack of microbial diversity may well be connected with the lack of plant diversity: gammaproteobacteria are commonly found on vegetation. To show that gammaproteobacteria could actually influence the kids' immune systems, the researchers took blood samples and looked at interleukin-10

, a molecule that decreases the intensity of allergic responses. One kind of gammaproteobacteria in particular, Acinetobacter, was correlated with higher levels of interleukin-10 in healthy kids. So it could be that Acinetobacter indirectly keeps the immune system from becoming overactive. This study with Finnish kids up an intriguing set of correlations between environmental diversity, microbial diversity, and allergies---how it all works remains to be puzzled out. [via ScienceNOW

Planet EarthMuseums are Full of Forgotten Treasures. Here's How You Can Help Find Them
Recommendations From Our Store