How Good Is Good Cholesterol? 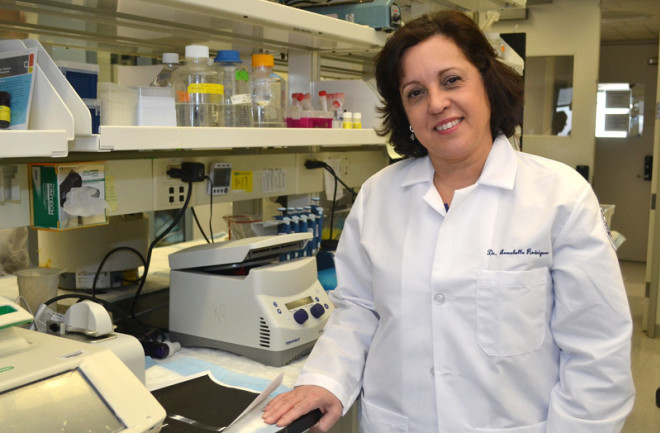 Open the freezer in the laboratory across the hall from Annabelle Rodriguez’s office at the University of Connecticut Health Center, and you will find rows of miniature fluid-filled vials, many of them holding tiny strands of DNA. For the past 13 years, Rodriguez, a physician-scientist in the university’s Center for Vascular Biology, has kept her eye on one particular gene in those DNA strands that is integral to the function of high-density lipoproteins (HDL). Rodriguez’s research suggests that HDL, what’s called the “good” cholesterol, may not be so good for everyone.

Conventional wisdom says high levels of HDL help to clear bad cholesterol from blood vessels, protecting against heart attack and stroke. However, Rodriguez has found that people with common mutations in a gene called SCARB1 paradoxically have elevated HDL and an increased likelihood of developing heart disease. Her work, along with recent studies by other groups, raises questions about the role of HDL, and the increasingly hazy relationship between HDL levels and heart disease risk.

More than a decade ago while working at Johns Hopkins University School of Medicine, Rodriguez, an endocrinologist, questioned why patients with high HDL levels were still having heart attacks. (An HDL level over 60 is considered best.) Rodriguez had already observed how HDL pulls cholesterol out of foam cells, which are found in the plaque that accumulates on blood vessel walls in people with atherosclerosis.

“We would take foam cell [models] and make them chock full of cholesterol, put HDL outside the cell, and see how well cholesterol was moving out of the cell — the more HDL the better,” Rodriguez recalls. “So why was it that I was seeing patients at Johns Hopkins with HDL over 60 who still had atherosclerosis?”

She latched onto the SCARB1 gene, inspired by a 2002 study in which MIT molecular biologist Monty Krieger found that mice engineered to lack that gene were more prone to heart attacks. Rodriguez identified a mutation of the gene that compromises the ability of HDL to regulate cholesterol levels. Like Krieger’s mice, people with this mutation had high HDL but were also more likely to have coronary heart disease.

How can a single gene remove the benefits of the so-called good cholesterol? One of HDL’s jobs is to ferry cholesterol from blood vessels to liver cells, where it is eliminated from the body in bile via the intestines. But in order to unload its fatty cargo, the lipoprotein needs a place to dock on the liver. Before Krieger started tinkering with the mouse gene SCARB1, he had identified SRB1, a protein found on the surface of the liver cells, as that dock for HDL. In a 2009 study, Rodriguez found that in people, the mutation in the SCARB1 gene was associated with both higher levels of HDL and diminished amounts of the SRB1 protein.

Could a mutation in a cholesterol-regulating gene be to blame in cases of unexplained infertility? Endocrinologist Annabelle Rodriguez thinks so. HDL not only carries cholesterol to the liver, she says, but it is also responsible for delivering cholesterol to the adrenal glands and ovaries. It’s needed there to make hormones, including progesterone, which is essential for early embryo development.

Years ago, Rodriguez noted that genetically engineered “Scarb1 knockout” mice were difficult to breed; the female mice were always infertile. Rodriguez wondered if the same association might exist in humans, so she analyzed ovarian cells from women undergoing in vitro fertilization at Johns Hopkins’ infertility clinic. In a 2011 paper, she reported that female carriers of a defect in SCARB1 had lower levels of progesterone than women without the mutation. It was the first study to suggest a link between the SCARB1 variant and human infertility.

“I’d like to think we could get to where we could offer treatments that are helpful for women of childbearing age — and their developing babies — and then can help protect them again later in life [from heart disease],” says Rodriguez.

With fewer of these receptors, the HDL can’t unload as efficiently, making it difficult for the lipoprotein to do its job, Rodriguez says. As a result, more cholesterol circulates in the bloodstream, and HDL, still flush with its cargo, cannot effectively remove cholesterol from plaques. Rodriguez says this is probably why people with the SCARB1 mutation are more likely to have buildup in their arteries, putting them at greater risk for heart attack and cardiovascular disease. Hammering the point home, in a 2015 analysis of data from more than 6,000 participants in the ongoing MESA (Multi-Ethnic Study of Atherosclerosis) trial, Rodriguez showed that the SCARB1 variant was associated with a 50 percent increase in heart disease risk.

The large MESA population also provided Rodriguez with a rich data pool: She decided to analyze all known mutations of the SCARB1 gene. In fact, the MESA researchers had included 46 different variants of the gene in their sequencing database. One of these variants, rs10846744, captured Rodriguez’s attention. A more prevalent mutation, this one affects the body’s ability to regulate inflammation and also appears to increase both HDL levels and heart disease risk. Since coming to the University of Connecticut in 2012, Rodriguez has shifted her focus to this DNA deviation.

The variation appears in a part of the gene previously thought to be inactive. Researchers think it acts on another gene called lymphocyte activation gene-III, located at the other end of the same chromosome. This gene makes a protein called LAG3, which switches off the body’s inflammation response. No protein, no end to the harms of inflammation. In a study last year, Rodriguez found that carriers of the rs10846744 variant had five times lower RNA levels in their cells, which then results in less LAG3 protein in their bloodstream.

This is key for Rodriguez: “LAG3 is connected to the immune system, and atherosclerosis is chronic inflammation of the blood vessels.” The SCARB1 mutation affects 43 percent of the population, and within this group the carriers for the rs10846744 variant have a 45 percent increased risk of heart attack — likely due to low LAG3 protein in their plasma.

These SCARB1 gene variant studies aren’t the only ones to challenge the long-held belief that increasing HDL was the key to reducing heart disease risk. A large-scale genetic study published in The Lancet in 2012 found no relationship between gene variants that increased HDL and the likelihood of heart attack (though this research did not evaluate the SCARB1 variants). And in several large-scale pharmaceutical trials, drugs specifically designed to elevate HDL had no effect on heart disease risk. “That’s astonishing,” says geneticist Sekar Kathiresan, director of preventive cardiology at Massachusetts General Hospital and senior author of The Lancet study. “Putting the genetic and drug study findings together suggests pretty strongly to me that we’ve been barking up the wrong tree with the HDL cholesterol story for the last 30 years.”

HDL levels are still considered valuable predictors of heart attack risk. Large observational studies like the Framingham Heart Study have shown that in the general population, those with lower HDL are more likely to have heart attacks than those with higher HDL. “I would say the old view is that HDL is a good cholesterol that protects against heart disease,” says Kathiresan. The emerging view, according to Kathiresan and other experts, is that high HDL is likely a marker for other things that are affecting risk.

“Whether individuals who have a defect in SCARB1, and as a result have high HDL cholesterol, are at an increased risk for heart attack is still an open question,” says Kathiresan. A 2016 Science study Kathiresan co-authored provided more evidence that the quantity of HDL may not be as important as its functionality. The study identified yet another mutation — albeit a rare one — in the SCARB1 gene, also associated with elevated HDL levels, that raised coronary heart disease risk by a whopping 80 percent.

For now, physicians continue to rely on the Framingham Risk Calculator, which considers an HDL level over 60 to be protective. A high HDL score could even influence a doctor’s decision to treat elevated LDL, which is a proven risk factor for heart disease. But for millions of patients, Rodriguez says, high HDL levels may belie an elevated risk. “So how do we counsel individuals about their risk?” she asks.

Experts suggest that perhaps, in the future, the standard testing in high-HDL populations could be bolstered by genetic tests. Rodriguez, founder of Lipid Genomics, a startup in UConn’s technology incubator, is banking on it: She is working to develop a diagnostic test to identify patients with LAG3 protein deficiency and a drug to treat those who are affected by it.

In the meantime, Rodriguez, who teaches cardiology fellows about lipids in preparation for their board certification tests, isn’t so sure she should still be teaching her students that HDL is the good cholesterol. “I tell them, ‘You can think of L for lousy and H for healthy, but always make lowering the LDL your priority. The healthy cholesterol — put a question mark next to it.’ ”