How far would you go to stop wetting the bed? 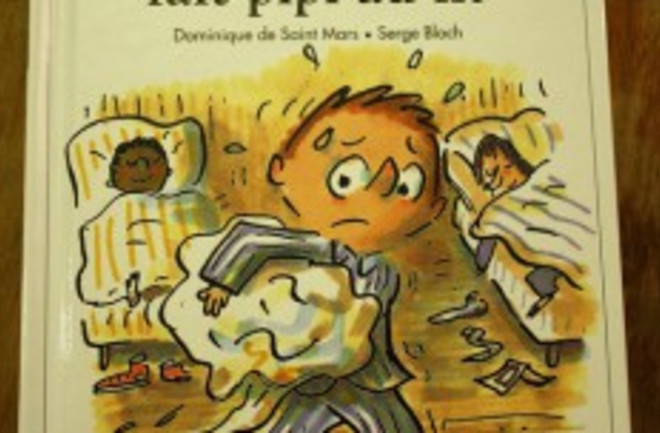 Photo: flickr/Nina J. G.Although children are most often the poor souls stuck with the torment of bedwetting (a.k.a. "nocturnal enuresis"), adults also have to deal with it from time to time. Fortunately, there are a number of methods designed to help, of which the device described in this paper is a pretty extreme example. Basically, it involves a humidity sensor that, if activated, turns on a pair of electrodes attached to the perineum (commonly referred to as the "taint"). The resulting electric current unconsciously activates the pelvic floor muscles and closes the urethra. In this study, scientists test whether this contraption really works (and if it's safe). The results? Well, let's just say that if you really want to stop wetting the bed, urine luck!New device and new concept for treating nocturnal enuresis: Preliminary results of a phase one study. "OBJECTIVE: This new device for nocturnal enuresis (NE) consists of a humidity sensor, which beyond activating the sound also triggers an electrical stimulus, contracts the pelvic floor muscles and closes the urethra, thereby interrupting the void. The aim of this study is to test if the theoretical principle described above is true and if the device used is safe. As a secondary endpoint, we studied the efficacy of this device in a small number of patients with NE. MATERIAL AND METHODS: The age of the patients ranged from 7 to 20 years old, with an average of 11 years. Two surface electrodes are placed at 3 and 9 o'clock on the perineum area. When the humidity sensor is activated it triggers an electrical circuit with a current frequency of 50 Hz. After 20 s of perineal contraction, if the patient does not turn down the device, a buzz sounds and the parents or the child will wake up. In this way, the child is taught to go to the toilet and void. All patients who used the device were also treated with behavior modifications. The definition of resolution of NE was 1 month of dry consecutive nights. RESULTS: All patients had daily or almost daily NE (two failed with DDAVP and alarm treatment). Four patients had monosymptomatic NE and two had the non-monosymptomatic form. In five patients the device worked as expected and one patient continued wetting the bed and dropped out of the treatment. The five patients who kept using the device had the symptoms resolved completely. There were no recognizable side effects associated with this treatment. CONCLUSION: The presented device works as a conventional enuresis alarm with the addition of a pelvic floor contraction. This has the advantage of the children not wetting the bed during treatment. This principle was proved by this study and the device demonstrated itself to be safe." Related content: A wireless wet diaper alarm. NCBI ROFL: The odors of the human vagina. NCBI ROFL: What's happening in your brain while you pee?