How did I wind up with a pit bull?

Here at CV, we have proven ourselves willing to wade into the fray on contentious topics -- religion, gender politics, the reality of string theory. In honor of National Pit Bull Awareness Day, I thought I'd take on another one, and explain how a rational adult with elementary school kids could wind up adopting a pit bull.

A few years ago, while picking up my youngest daughter at kindergarten, I passed a brindled pit bull, tied to the fence. I immediately got my judgey-mom hackles up -- "Who would tie a pit bull up in front of a school?!?! Where there are kids?!?!!". Before I could go inside, the dog's family came out of the school, and it took about 3 seconds of observation to recognize that what I was perceiving as a threat was actually an incredibly sweet affectionate dog. Who just happened to have a skull the size of a brick. We later all became friends, and I found out more about Daisy's backstory. Daisy had been adopted from the shelter, where she had been rescued from being a "bait dog" (used to train other pit bulls to fight). In spite of the scars on her face and neck, she remains a sweet trusting dog. She lives happily with a cat, and deals patiently with all the vigorous "love" that young kids can deal out. In short, Daisy was "proof of concept" -- that not every pit bull was a danger, and that one could potentially be a real family dog.

About two years ago, my husband and I started talking about adopting a dog. The kids were lobbying hard, and we'd always loved dogs, and were finally feeling like we could handle a new logistical challenge. We were pretty clear about what we wanted -- a fairly calm dog, who was good with kids, active, not too large, and who didn't bark much. However, we still kept pushing the idea into the future. During this time, I would frequently write papers in a local dog-friendly coffee shop. While working there one day, a man walked in with a buckskin colored pit bull wearing a blue "Adopt Me" vest. 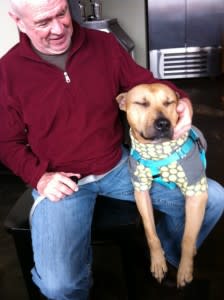 I'm a sucker for a dog in a vest, but in spite of my experience with Daisy, I still went into an instantaneous high alert at the presence of a pit bull. But, like with Daisy, it was impossible to retain any anxiety, after watching the dog affectionately lean on anyone who offered to pet it, wag at anyone who talked with it, and lick curious children who doddled up to it. The dog was incredibly calm, sociable but not excitable, and openly affectionate with everyone. I went home and told my husband that I may have found our dog. We brought Zack home not long after.

3. Living with a pit bull

If you read accounts of people living with pit bulls (see here, or here, for lovely descriptions from better writers than I, or here, for a video testimony from a veteran with PTSD), they all say similar things -- "Snuggly", "Hilarious", "Loyal", "Smart" -- all of which describe our experience to a tee.

The first thing about having a pit bull is that your lap is no longer your own. If we're anywhere close to ground level, Zack comes running hoping for an invitation to climb aboard. If you're seated in a chair, or a couch, he's making strategic plans for how he can join you. If you're standing, he's leaning against you. Even in these bids for affection, however, he remains extremely well-mannered. He's extraordinarily patient, and given that he shares the house with a particularly exuberant kid, that patience is sorely tested on a regular basis

Another aspect of pit bull ownership is that you're not exactly invisible. Zack tends to get two major reactions when we're out in public. The first is the "pit bull swerve", where on-coming pedestrians will cross the street rather than pass you. The second is the complete opposite. Zack is bait for dog lovers, who can sense a Good Dog from a block away (and for unknown reasons, he seems particularly popular with men). Pretty much every walk features a random man giving a gruff nod of approval and a deep throated "That's a good lookin' dog". He's had a carload of people pull over and come out of the car to meet him (to which he responded by crawling into the back seat so he could sit on their laps). But the final bit of living with a pit bull is being aware. I'm not blind to why these dogs can be raised for aggression. Any dog has the potential to bite, and any large dog has the potential to cause serious harm -- pit bulls are no exception to this rule. But moreover, like many other working breeds, pit bulls are known to be extremely "game" -- if they get an idea in their head, they don't let it go easily. (The phrase "stubborn as a bulldog" did not come out of vacuum.) This trait can be positive, in that it makes dogs like pit bulls very easy to train -- they stay focused on a task, and work hard to succeed

. It can be neutral in a family dog, where the worst we have to put up with is Zack's strong opinions about where we go on walks. But, if a highly game dog is also aggressive, you wind up with every pit bull horror story. So, even though Zack has never shown signs of aggression (to people, dogs, or cats), we're still careful about putting him in any situation where he can get too focused or wrapped up in what he's doing. He's strong and athletic, and can do damage unwittingly, so it's just not worth the risk of letting him off leash in a dog park, or getting him too riled up while playing. That said, I haven't found the pit bull-specific adaptations we've made to be any bigger than those I adopted for my black lab. The lab had a different set of triggers to deal with (no rollerbladers, no linoleum floors, no young kids, and no men in uniforms with hats), but required the same basic acts of a responsible dog owner -- knowing your dog's limits and keeping them out of situations where they are less likely to be successful.

4. The Moral: You shouldn't automatically rule out adopting a pit bull.

The reason I'm bothering with writing this is that if you want to adopt a dog in an urban area, a huge fraction of the dogs that will be up for adoption will be pit bulls

. Shelters are not full of 8 week old golden retriever puppies. They are full of adult pit bulls desperately in need of loving homes with responsible owners. More than half of dogs currently euthanized in the US are pit bulls. I'm sure some are dogs who have been abused to the point where they're unadoptable, but many are dogs like Zack, who wound up in a shelter though no fault of their own, and stand a chance of being the best dog you'll ever own. 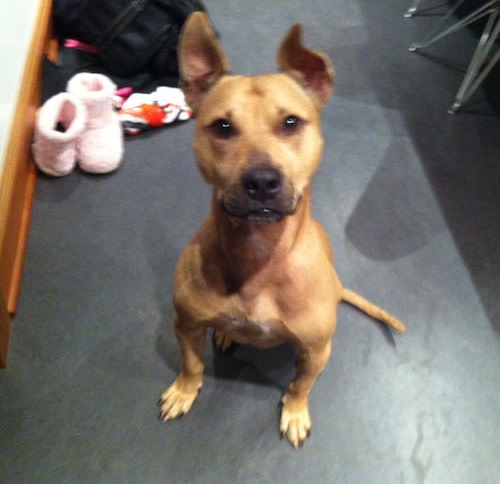 Just a couple of things in closing. I probably wouldn't have chosen a pit bull if I wasn't used to having large dogs, wasn't willing or able to train a large dog, and wasn't willing to spend a lot of time hitting the pavement to get the dog a lot of exercise. I also wouldn't necessarily recommend bringing just any pit bull into a house with other pets or kids. I was much more comfortable adopting Zack because he'd been in a foster home for several months, living a life style very similar to what he'd be living with us (in the city, lots of walking in public, frequent exposure to other people and dogs, etc). He'd been placed in a foster home because he was going crazy in the shelter, and giving the appearance of being an "unadoptable" dog. Instead, it was just that he just really needed to be in a home, and it wasn't until he was placed in one that his true nature could be seen. Many cities have pit bull rescue organizations that can help give guidance, and that frequently do extensive temperament testing before placing dogs up for adoption. ps. I'm closing comments on this one, because every single pit bull comment thread turns rapidly into a crazed shouting match between "Kill them all!" and "They're the best dogs ever and they'd never hurt a fly!!!!". I'd rather enjoy the rest of my weekend than moderate the inevitable.