House Calls for the 21st Century: Carrying a Doctor in Your Pocket

Home diagnosis kits will soon let you give yourself a checkup whenever and wherever you want. 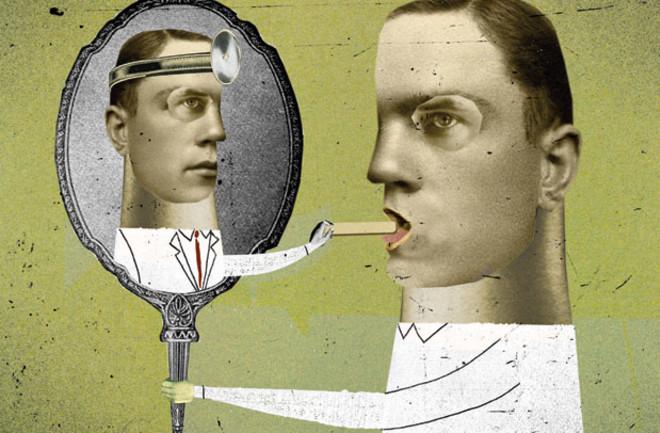 I don’t know why people complain about going to the doctor for checkups. I’d go every week if I could. It’s not just for the sociability of exchanging interesting new microbes in the waiting room, or the pride in hearing my doctor mutter with approval when I hand her the 58-page printout of all the illnesses I’ve self-diagnosed based on what I’ve read on the Internet. Rather, it’s because I know that a lot of creepy things can happen in my body in a whole year.

Since my health insurance plan inexplicably won’t pay for weekly checkups, I’m faced with long, distressing gaps between visits. As with so many annoyances, this one got me wondering if it’s a problem that calls for a slew of new gadgets for me to buy and not read their user manuals. Sure enough, it does! Or will. So much so that in a few years I may need to build an entire walk-in closet just to handle all the gizmos designed to let me play doctor with myself. (OK, I could have put that better.)

A major concern in spending too much time away from doctors, of course, is that cancer will sneak in when no suitably trained medical professional is looking. Given my deep aversion to sunblock, I’m especially wary of skin cancer—and I find my annual visit to the dermatologist entirely unsatisfactory. I point out to him a mole that exactly matches the photo I found online, and he dismisses it with a bored snort. Then he calls in colleagues to share his concern about what I thought was a slow-to-heal mosquito bite. I would prefer to have my screening daily, to avoid the moment when the dermatologist solemnly intones, “I only wish we had caught this 364 days ago.”

Future me will have no such anxieties, because he will be equipped with the home version of a handheld cancer scope currently under development by researchers at the University of Rochester. This handy device can be trained on any suspicious growth to provide what is essentially a 3-D virtual biopsy of the nasty thing.

The screwdriver-size probe enlists a near-infrared laser that can penetrate skin to a depth of as much as 2 millimeters, about one-tenth of an inch. It provides a much more meaningful evaluation than a dermatologist’s eyeball, which must rely on the vague, ambiguous clues offered by the surface appearance of the skin. That’s why when a mole looks funny doctors have to remove it, along with a macaroon-size piece of flesh around it, to find out if it’s cancerous. (I’ve had three such biopsies. Seriously.)

The challenge in creating a device that “sees” cancerous cells isn’t just getting the light to depth, but then getting it to focus sharply on the telltale features of a cell (which may span just a couple microns, or millionths of a meter) and to do so at a whole range of depths. Conventional lenses are not up to the task, so probe designer Jannick Rolland, an optical engineering professor at Rochester, used a liquid lens consisting of a mixture of oil and water. The lens’s shape can be precisely controlled by an electric current, allowing it to refocus 30 times a second as it snaps thousands of pictures of cells in the mole and the flesh around it. A computer then stitches the myriad pictures together into a single 3-D image so doctors can examine the mole and skin from various angles, including from underneath. “This technology can do a better job of screening moles for cancer,” Rolland says. “There won’t be as many unnecessary biopsies, and doctors won’t have to cut out as much skin around them. Our dream is to do away with the biopsies altogether.”

You cannot buy Rolland’s probe at any price now, because it’s still in the testing phase, but once it comes out its cost should be modest. Affordable cancer scanners could be deployed in rural areas in a few years, allowing anyone to point them at a mole and zip off a virtual biopsy via cell phone to a distant specialist.

Eventually, Rolland expects, software will progress to the point where her probe is able to screen for cancer automatically. She is also working with colleagues on ways to use the device to diagnose other skin diseases and even eye disease.

Next Page: #2—The Tumor Sniff-Tester

While we’re on the topic of cancer (not that you asked, but here we are), colon cancer also worries me. Five years between colonoscopies? Don’t get me wrong, I’m not eager. But if catching colon cancer early is worth subjecting people to all that, it seems to me it ought to be checked more than bi-decadely.

As it happens, there will soon be a gadget in the works for that, too. Not a home colonoscopy kit, thankfully. The device I have my eye on is basically a cancer Breathalyzer. “Cancer cells have distinctive byproducts that healthy cells don’t,” explains Paul Rhodes, a neuroscientist and entrepreneur who has founded a company called Metabolomx to develop and market cancer sniff tests. Rhodes’s plan of attack: “These small molecules diffuse into the blood and the breath, and the pattern can be recognized.”

Rhodes’s inspiration came from cancer-sniffing dogs, which have been shown in studies to be 95 percent accurate in distinguishing the breath of a colon cancer patient from that of a healthy subject. Dogs can do that because their noses contain 900 different types of olfactory receptors, chemical detectors in cells that respond to many different kinds of odor molecules in particular ways.

My first thought was “Great, I’ll just train my dog, Welby, to sniff for colon cancer.” But I quickly realized that unless any tumor I develop happens to smell exactly like a Liv-A-Snap, I can’t count on my mutt.

I have higher hopes for the Meta­bolomx test, which has 130 different molecular sensors printed on a postage-stamp-size piece of plastic. Breathe on it and the sensors change color when activated; the pattern of colors can then be read by a computer for thumbs up or down. Rhodes claims that in his research, the kit has had 85 percent accuracy in identifying patients with lung cancer.

So far the Metabolomx test has been designed only to detect lung cancer, but colon and breast cancer shouldn’t be far behind, Rhodes says. He adds that other diseases should be detectable on breath as well, including diabetes and some types of kidney disease. Impoverished hypochondriacs, rejoice: When the test hits the market—in a couple of years, Rhodes hopes—it should cost just about $100 a pop.

And what about this incredible tool I have right here in my pants, one I share with about half the people on the planet? Yes, my cell phone. As if it weren’t enough that this device enables me to text, video chat, poke, tweet, and Instagram everyone I’m usually trying to avoid, it also has the makings of a state-of-the-art medical-imaging device.

Credit UCLA bioengineer Aydogan Ozcan, who has come up with a way to convert a cell phone camera into a blood-cell imager that can potentially eliminate the need to send blood to a lab. His main trick: He replaces the physical phone-camera lens with a software lens—a set of programs that can take the chaotic-looking pattern of light and shadows that shine on the phone’s unlensed image sensor and re-create an image out of it.

Ozcan begins by mounting a glass slide containing a blood sample on the phone, right in front of the camera sensor, so that light shines through the blood. The resulting shadow pattern contains a wealth of information about whatever is in the sample. It could theoretically screen for diseases like malaria and sickle-cell anemia and could also do a straightforward blood count. “That pattern is the fingerprint of the cell’s structure,” Ozcan says. “Our algorithms can process the pattern and reconstruct the image in fine detail.” It helps, he notes, that today’s smartphones have graphics-processing units more powerful than a room-filling supercomputer of 20 years ago.

As with the other self-diagnosis tools, home use of Ozcan’s cell phone blood imager is a ways off, but it is already being looked at for pilot programs in remote locations where doctors and lab equipment are in short supply. The images it captures can be sent off as text-message attachments to a lab technician. And someday, the phone may have the smarts to do the diagnosis on its own. “A cell phone embodies an amazing set of technologies,” Ozcan says. “Scientists are just realizing what a cost-effective platform it is for diagnosis.”

I, for one, am perfectly ready to hand over all responsibility for monitoring my health to my cell phone. I’d set it up to run through a complete battery of tests every hour and tweet my doctor the results. I’m sure she’d want to be kept posted. And think of how much material we’ll get to go over together during my annual visit. I can’t wait to see the look on her face.