Heart-Stopping Cinematic Excitement: Guess How Much Fat Is in Movie Popcorn? 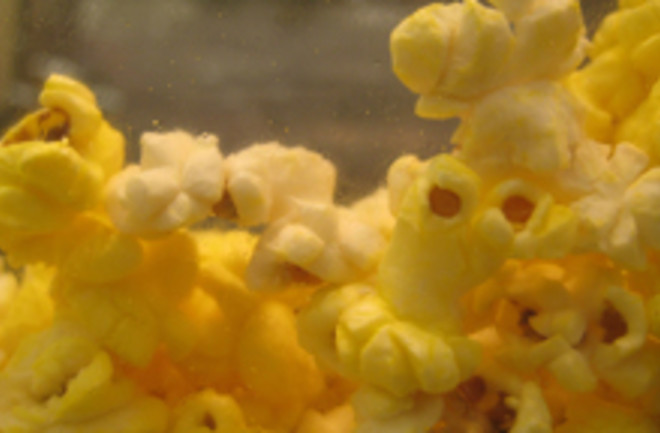 In the latest installment of "science ruins your guilty pleasure," a new report confirms what everyone pretty much already knew--movie popcorn is terrible for you. Via the Los Angeles Times:

A medium-sized popcorn and medium soda at the nation's largest movie chain pack the nutritional equivalent of three Quarter Pounders topped with 12 pats of butter, according to a report released today by the advocacy group Center for Science in the Public Interest.

Popcorn from Regal Entertainment Group, AMC and Cinemark, were analyzed in lab. Regal was the worst offender, packing 1,200 calories, 60 grams of saturated fat, and 980 milligrams of sodium into a medium popcorn--before adding butter! The gooey buttery sauce adds 200 calories and 3 grams of saturated fat per 1.5 tablespoons. Both Regal and AMC pop their popcorn in coconut oil, which is about 90 percent saturated fat, noted the study's authors. Cinemark uses canola oil, which is healthier, but a medium popcorn from Cinemark will still add around 760 calories and 3 grams of saturated fat to your diet, according to the analysis, which is published in the December issue of CSPI's Nutrition Action HealthLetter. On a positive note, no trans-fats were detected in any of the samples. Apparently, there aren't any plans to include a low calorie popcorn at any of the movie chains' snack bars, so if you want healthier options, just do like everyone else and sneak in your own food. Related Content: Discoblog: New Theory: Plastic Can Make You Fat? Discoblog: For Impulsive Eaters, Losing Weight Is a Guilt Trip Away Discoblog: Just Like Humans, Crows Embrace Junk Food…and Pay the Price