Hawkmoths jam bat radar with ultrasonic blasts from their genitals. 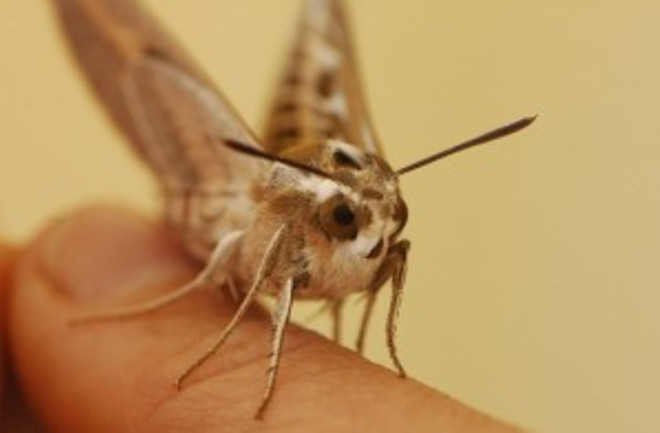 Photo: flickr/Lies Van RompaeyEvolutionary arms races can lead to some truly spectacular behaviors. This has got to be one of the most comic book-ready examples I have ever heard of. As you probably know, insect-eating bats use echolocation (sonar) to navigate and to identify and capture their prey. It's also been known for some time that hawkmoths can use sound to jam this system. However, it gets even better: turns out that the male moths are making ultrasonic sounds by scraping their genitals on their abdomen. You can't make this stuff up.Hawkmoths produce anti-bat ultrasound. "Bats and moths have been engaged in aerial warfare for nearly 65 Myr. This arms race has produced a suite of counter-adaptations in moths, including bat-detecting ears. One set of defensive strategies involves the active production of sound; tiger moths' ultrasonic replies to bat attack have been shown to startle bats, warn the predators of bad taste and jam their biosonar. Here, we report that hawkmoths in the Choerocampina produce entirely ultrasonic sounds in response to tactile stimulation and the playback of biosonar attack sequences. Males do so by grating modified scraper scales on the outer surface of the genital valves against the inner margin of the last abdominal tergum. Preliminary data indicate that females also produce ultrasound to touch and playback of echolocation attack, but they do so with an entirely different mechanism. The anti-bat function of these sounds is unknown but might include startling, cross-family acoustic mimicry, warning of unprofitability or physical defence and/or jamming of echolocation. Hawkmoths present a novel and tractable system to study both the function and evolution of anti-bat defences."