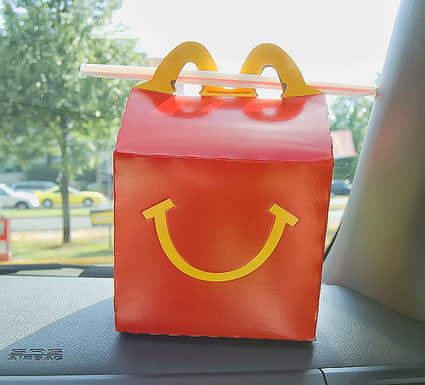 A decision made Tuesday by San Francisco's Board of Supervisors may make little kids (and probably some adults) cry. With an un-vetoable vote of 8 to 3, the board banned restaurant chains like McDonald's and Burger King from giving out toys with "unhealthy" happy meals within San Francisco's city limits. The decision is preliminary and will be followed up by a second debate and vote on Tuesday, November 9. Under the proposed rule, meals deemed healthy can still be packed with action figures. To meet the city's "healthy" standard a kid's meal must contain fewer than 640 milligrams of sodium and 600 calories, and under 35 percent of those calories can come from fat. It also has to include a serving of fruit or vegetable with each meal and meet a number of other requirements (pdf). The majority of McDonald's Happy Meal options don't meet these standards, including ALL of the cheeseburger options and any meal with fries. McDonald's spokesperson told The New York Times they don't agree with the Supervisors' stance:

McDonald’s called the bill misguided. “It’s not what our customers want,” said Danya Proud, a spokeswoman for the company, in a statement. “Nor is it something they asked for.”

The restaurateurs aren't the only ones disappointed in the decision. San Francisco's Mayor Gavin Newsom (who just won the lieutenant governor's seat in this week's election) said he would veto the bill, even though with eight supervisor votes he can't override the decision. Others aren't excited that the city government is trying to control what individuals are eating, said chef Henry Dimbleby in his blog for The Telegraph

Libertarians, needless to say, are not impressed. “This is great,” reads a typical message board entry. “As a parent, I support this 100%. But I was wondering, why stop at telling me what to feed my kids? It would be great if the government would also tell me what time to put my kids to bed and what to clothe them in and what names to give them and how many I can have. That would make being a parent much, much easier and less time consuming. Thanks.”

A very similar ban came out of Santa Clara County (also in California's Bay Area) in April. The San Francisco board was spurred to act themselves because of the city's struggle with childhood obesity: Over 30 percent of fifth graders are overweight. The board hopes the ban will encourage kids to eat healthier foods, supervisor Bevan Dufty told the SF Gate

"If you have to put a Shrek doll with a package of carrots," Dufty added, "maybe that's what you have to do, but there hasn't been a real incentive for this industry to do that, and I think that this legislation in a small appropriate way is a step to say you need to do things differently."

Discoblog: NCBI ROFL: I’d like a number 2 value meal, a frosty, and a peer-reviewed publication, please.

Discoblog: Why Do Some People Never Get Fat? Scientists May Have the Answer