If you have even a marginal interest in evolutionary biology you will probably have heard of Hamilton's Rule, a simple formal representation of the logic whereby a gene which favors altruism may spread through a population: rB > C, where r = coefficient of relatedness on the gene in question, B = benefit to those related, and C = cost to oneself. The idea is almost trivially obvious. Consider that you are in a situation where you are faced with the possibility of aiding your full sibling at a cost to yourself. Now imagine that you carry a single allele which favors altruism toward close relations. Your sibling has a 50% probability of carrying that allele identical by descent (let's stay haploid for simplicity). From a "gene's eye view" it benefits the allele to predispose you to helping your kin in direct proportion to the probability that your kin carry that allele. In other words the logic underlying inclusive fitness isn't really that abstract, it is ordered around the benefits and costs to the theoretical genes which manipulate social behavior over the long term. This explains why the evolutionary biologist J. B. S. Haldane responded "...I would to save two brothers or eight cousins," when asked if he would save his brother from drowning. The genetically relatedness to a sibling is 1/2, to a cousin 1/8. 2 X 1/2 = 1 and 8 X 1/8 = 1, basically equivalent to yourself. Evolutionary altruism is obviously somewhat different from common sense altruism, because you're averaging out the behavior of many individuals over a time window. The fascinating back story behind the development of this sort of formal thinking is recounted in W. D. Hamilton's first collection of papers, Narrow Roads of Gene Land: Evolution of Social Behaviour. An elaboration upon the core logic of Hamilton's Rule in two seminal papers revolutionized our understanding of the evolution of sociality in the 1960s; Hamilton was proud of how widely cited his original papers were. John Maynard Smith's evolutionary game theory and Robert Trivers reciprocal altruism emerged out of the same ferment (Trivers' acknowledges the debt to Hamilton in Natural Selection and Social Theory). More recently E. O. Wilson and David Sloan Wilson have been arguing for a rehabilitation of more complex models of the origins of sociality through multilevel selection theory. But what about Hamilton's original ideas, the core elements of inclusive fitness? Their spareness rendered them analytically tractable, but like all models the original formalism made some simplifying assumptions. Relatively weak selection pressures, as well as additivity of fitness effects, were two major axioms, and ones which Hamilton defended in Narrow Roads of Gene Land. A new paper in Science argues that the assumptions rendered the model too simple to be of more than qualitative or heuristic utility in most cases. They modify the Hamiltonian framework by including nonlinear fitness distributions as well as stronger selection coefficients in the context of microbes. A Generalization of Hamilton’s Rule for the Evolution of Microbial Cooperation:

Hamilton’s rule states that cooperation will evolve if the fitness cost to actors is less than the benefit to recipients multiplied by their genetic relatedness. This rule makes many simplifying assumptions, however, and does not accurately describe social evolution in organisms such as microbes where selection is both strong and nonadditive. We derived a generalization of Hamilton’s rule and measured its parameters in Myxococcus xanthus bacteria. Nonadditivity made cooperative sporulation remarkably resistant to exploitation by cheater strains. Selection was driven by higher-order moments of population structure, not relatedness. These results provide an empirically testable cooperation principle applicable to both microbes and multicellular organisms and show how nonlinear interactions among cells insulate bacteria against cheaters.

The bottom line here is that the authors are indicating that a simple framework with the parameters of Hamilton's original formalism can not explain the various forms of altruism found among microbes, even ubiquitous ones such as biofilms. One should not be surprised, as the problem of altruism was not solved by inclusive fitness in its details, though many use it in a hand-waving manner, i.e., "...everyone knows...." To correct this impasse the authors modify Hamilton's Rule:

Some of the parameters are now bold. That means they're vectors, not scalars. Basically lists of variables. First in the list for r is the original coefficient of relatedness, with subsequent elements representing higher orders of relatedness. b represents the benefits to noncooperating morphs as a function of social environment, the frequencies of cooperators and noncooperators. The cost to the focal individual remains the same. Finally, m are the moments for the cooperators (measuring distributions of fitness in terms of their shape) and d represents the difference between cooperators and noncooperators of the distribution. When fitness effects are totally additive, that is there are no nonlinearities and conditionalities of genotype fitness on environment, the second part of the equation falls away, and r and b reduced to their first elements, so you have a classical form of Hamilton's Rule. Figure 1 illustrates the aspects differentiating a classical vs. modified Hamiltonian model:

Basically the simplifying assumptions in Hamilton's original model is illustrated by panel A. The authors claim that the assumptions allow for no quantitative prediction of real structured altruism which we see. Figure 2 has some experimental data: 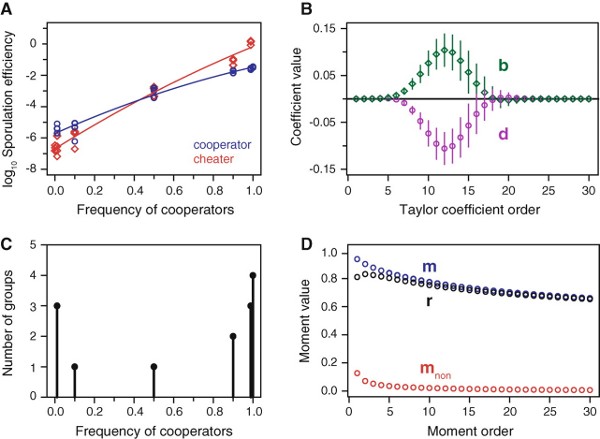 As you can see in panel A there's frequency dependence going on here. Cooperators run up against a wall, but the frequencies at which they're fitter than the noncooperators is rather high. Panel B is important because it shows that the benefits really accrue at the higher moments, now the lower additive one. This means that higher level population structure and nonlinearities when viewed on an individual scale are very important. Figure 3 illustrates the nature of frequency dependence, and the conditions where cooperators flourish and cheaters can persist: 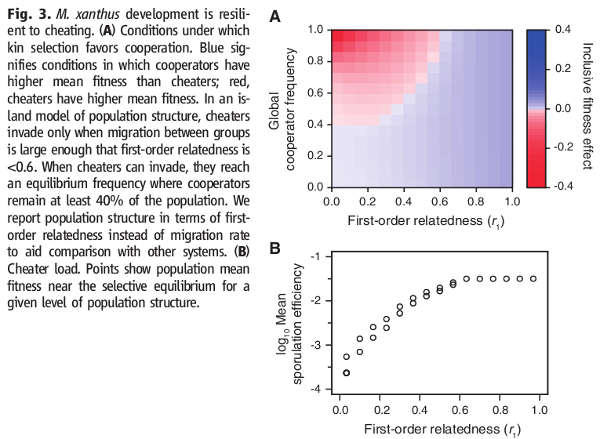 Since higher order structure is critical parameters such as migration between groups are important to keep track of us. More experiments obviously need to be done here, I'm not convinced that one model can explain-it-all. But, there are obvious limitations to the classical Hamiltonian framework in many situations. One of the major points in this paper which jumped out at me was the following: "...increasing-returns nonadditivity allows cooperation to evolve at levels of population structure comparable to that seen among social insect colonies." Increasing returns is a concept which is important in economics in understanding how technological innovation has allowed for productivity gains over the past two centuries. Human social systems are complex, almost baroque to a fault, and their byzantine structure can easily be dismissed as random acts of contingency. But increasing returns to cooperation may explain the ubiquity of more complex orders than we would expect. And yet here we see it on the scale of bacteria! The logic of non-zero sum is deeply rooted in the nature of life, but the next stage is to flesh out how it produces such rich behavioral phenomena. Endless behaviors most ornate!