A new paper in Molecular Psychiatry has been reported on extensively in the media, and readers have mentioned it several times in the comments. I read it. It's titled Genome-wide association studies establish that human intelligence is highly heritable and polygenic. But the fact is that I read this paper last year. Back then it was titled Common SNPs explain a large proportion of the heritability for human height. I kid, but you get the picture. The new paper establishes for intelligence what we already suspected: most of the genetic variation in this heritable trait is accounted for by numerous genes of small effect. You inherit variants of these numerous genes from your two parents, and your own trait value is to a large extent a combination of the parental values. The issue is not if intelligence is heritable, but the extent of that heritability. The standard way to estimate human heritability was to track similarities across individuals with varying degrees of relatedness. For example, compare identical twin correlations on a trait with fraternal twin correlations. The main objection to these methods is that one could argue that environmental factors were correlated with particular genetic relationships (e.g., you treat individuals who are presumed identical twins more similarly). There are many reasons that I'm skeptical of extreme objections in this vein, but there are out there. This particular experiment design sidesteps that issue by looking at unrelated individuals. Not just notionally unrelated individuals, but actually those who were not genomically related. That's a key difference between quantitative genetics and quantitative genomics. The former takes biological relatedness at face value, translating from ideal categories. The relatedness between full siblings is 0.50 for example. But when you look at the genomic level you can account and correct for the variation of that relatedness amongst siblings (e.g., two of my siblings exhibit a relatedness of only 0.42)! In this study they focused on numerous widely dispersed single nucelotide polymorphisms (SNPS), specific variants within genes, and used these to infer the nature of the genetic architecture of intelligence. More specifically, the genetic variation of two forms of intelligence, crystallized and fluid. The former seems to correspond to knowledge and the latter to raw problem solving abilities. Perhaps the difference between having an excellent operative system and applications vs. top of the line hardware? In any case, here's their abstract:

General intelligence is an important human quantitative trait that accounts for much of the variation in diverse cognitive abilities. Individual differences in intelligence are strongly associated with many important life outcomes, including educational and occupational attainments, income, health and lifespan. Data from twin and family studies are consistent with a high heritability of intelligence, but this inference has been controversial. We conducted a genome-wide analysis of 3511 unrelated adults with data on 549 692 single nucleotide polymorphisms (SNPs) and detailed phenotypes on cognitive traits. We estimate that 40% of the variation in crystallized-type intelligence and 51% of the variation in fluid-type intelligence between individuals is accounted for by linkage disequilibrium between genotyped common SNP markers and unknown causal variants. These estimates provide lower bounds for the narrow-sense heritability of the traits. We partitioned genetic variation on individual chromosomes and found that, on average, longer chromosomes explain more variation. Finally, using just SNP data we predicted ∼1% of the variance of crystallized and fluid cognitive phenotypes in an independent sample (P=0.009 and 0.028, respectively). Our results unequivocally confirm that a substantial proportion of individual differences in human intelligence is due to genetic variation, and are consistent with many genes of small effects underlying the additive genetic influences on intelligence.

The authors suggest that these values are a floor to heritability estimates, at least with the sorts of homogeneous populations they have here. That's because their statistical genetic method is likely to miss a lot of true genetic variance due to its diminishing power when the causal genes are at too low of a frequency. They're working within a framework where a given typed marker is correlated with a nearby I.Q. causal marker. At very low correlations they are going to miss the causal variant. Some of the psychologists interviewed by the media contended that on one level these were banal findings. A value in the range they report is entirely within the mainstream of behavior genetic studies, which use pedigrees and what not. But many people don't trust behavior genetics for whatever reason. One person's banality is another person's profundity. But I think these sorts of findings should tilt us away from the proposition that large effect quantitative trait loci are common for I.Q. By this, I mean an "I.Q. gene" which is responsible for a huge difference between two people. There are some of these no doubt, especially those which result in mental retardation, but they don't play that much of a role in all likelihood in 'normal' variation. Earlier linkage studies which reported such genes made huge media splashes and tended to fade because of lack of replication. Those genes may actually have been real QTLs, but the huge effect was likely to have been a random chance occurrence. Genome-wide association is better able to detect smaller effect genes within populations, but even it has been notably lacking in robust results. 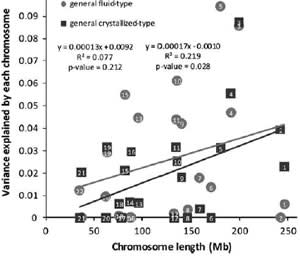 Overall, this is good science. The results aren't what those of us who were hoping that the intersection between psychometrics and genomics would yield low hanging fruit were pulling for. But reality is often likely to dash our hopes. No matter the banality of the final results, I do think the figure to the left is rather cool. It shows that the larger the chromosome the greater the proportion of variance is explained by that chromosome. This is entirely expected in theory (large chromosomes would carry more causal variants), but it is gratifying to still see it born out empirically.